What is this peat stuff anyway?

So what is peat, and why is it so awesome?

In simple terms, peat is basically thousands of years worth of  accumulated dead or dying plant life. In a wetland-type environment, the water saturation on the surface (lack of oxygen) slows the decay of decomposing plant matter, causing it to accumulate and (over a very long time) form peat bogs. In fact, the majority of the wetland areas in the world are peat bogs. Peat itself resembles a mud brick, but is spongy and damp, and has no distinctive smell in its natural damp state, and even less when fully dried. 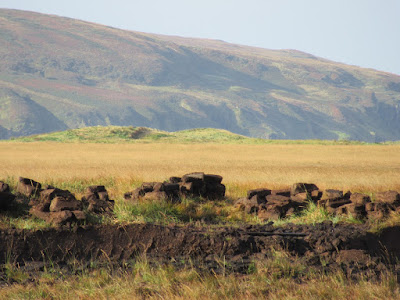 More importantly for us though, dried peat can be used as a fuel, and was a major source of fuel (and therefore heat) in many areas of the world, before being gradually replaced by coal. This means peat was used for fires, and those fires were sometimes being used to dry the malted barley that was to become whisky. When dried peat is burned, the smoke gives off a uniquely smoky, vegetal, pungent aroma that permeates the drying malted barley, and these aromas and flavours are then present in the finished whisky. Peated perfection!

So, peat is so awesome because it gives our whisky the smoky, earthy, vegetal flavours many people love. Some don't, but in my opinion they're missing out! While these flavours can be surprising if they're not expected, particularly if one's Scotch whisky experience is limited to (for example) Johnnie Walker & coke, the amazing depth they add to a suitable whisky should be reason enough to try one. Most people prefer their spirits to be sweet and very easy drinking, but if you add some peat smoke to balance out that sweetness, the effect is often truly awesome.

The level of influence can sometimes be researched by looking for a 'ppm' level, which is the phenolic content (peat smoke is a phenolic compound) measured in parts per million in the malted barley. Some distilleries utilise these measurements as a marketing tool as well, Bruichladdich for example is not shy when telling you their 'Port Charlotte' range is peated to 40 ppm, and their 'Octomore' range is much higher, up to 309 ppm so far. To my knowledge, this is the highest in the world. However, this ppm measurement is not always a good indicator of the finished product, as it is measured before the milling, mashing, fermenting, distilling and ageing process takes place. The finished product is also heavily influenced by the shape and size of the stills and condensers, and the casks used for maturation, and a myriad of other factors. And peaty flavours also diminish naturally over time during maturation. This is why many heavily peated whiskies are bottled and sold at a relatively young age, for example the Bruichladdich Octomore range is generally aged for only 5 years, retaining its maximum peaty-ness. As a general rule of thumb, a peated whisky will lose around 60% of it's phenolic compounds before it is bottled. So, if you're looking for a heavily peated whisky, do not take the age statement as the main factor in your purchasing decision, in fact be wary of an older (around 18 years or older) whisky that is heavily peated if that's your main criteria, as you may not get what you wished for.

Another factor to consider is that there are a few different methods of coming up with that ppm figure. The most common is high-pressure liquid chromatography, or HPLC, but the different methods will give different results. Yet another factor is where the peat itself was sourced. Island and coastal peat is completely different to that found in the central highlands of Scotland, and one area's peat can be completely different from the next, depending on the local conditions and the vegetation that has contributed to that particular peat bog. For example Islay peat is mostly sphagnum mosses and grasses, and is salt-washed and weather-beaten, to different degrees depending on where the bog is, while Orkney peat is mostly heather and is lighter, more floral and more smoky rather than the heavily phenolic flavours given by Islay peat. That also goes for peat in other parts of the world, depending on its composition. Delving deeper into that (pun intended), the depth that you choose to cut your peat from can also make a big difference. For example Laphroaig make a point of cutting their peat from lower down in the bog for their floor-malted barley, which is said to make a significant difference to the finished product, even when that floor-malted barley only makes up 15-20% of the distillery's annual barley requirements.

And lastly, don't assume that you favourite peated whisky is made with local peat. Much mention is made of distilleries using local barley and local water, but their peat source is often left unmentioned. Port Ellen Maltings for example uses Islay peat wherever possible (depending on weather conditions etc.), while Bruichladdich's Port Charlotte & Octomore peated whiskies use peat sourced from the Inverness-shire region, since the barley is malted at Bairds Maltings in Inverness. And that also applies to the Islay Barley variants of both labels.

So to sum up, there's a lot more to peat than you might think. And when it comes to that ppm number, all may not be as it seems! The only real test, of course, is in the nosing and tasting!
at May 04, 2014 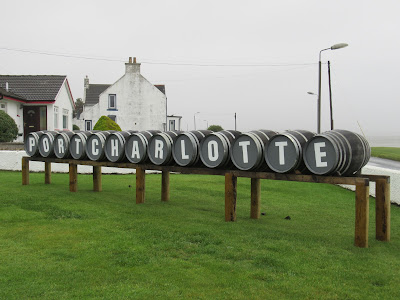