Yes, I did visit this slightly-mad alchemist and all-round gentleman during the last Tasmanian adventure, but I couldn't visit Tasmania without knocking on his door again! Once again I was lucky enough to taste some more amazing examples of his whisky, including a couple of very special 'previews' which aren't ready for bottling just yet. This visit was definitely the other highlight of the trip!

I don't think it's much of a secret that I'm a massive fan of Tim Duckett's work, and I still believe Heartwoods to be the best value for money Australian whisky you can buy. Yes they're expensive, but they're absolutely worth every cent if you ask me. In fact Tim's range of single malts and vatted / blended malts are the only independent bottlings I will buy without tasting them first. If it has Tim's personal seal of approval, you can rest assured it's going to be good! Heartwood's popularity is ever-increasing, and nowadays there's a lot more attention and interest coming from overseas (and a couple more awards from Jim Murray), to the point where Asian companies have wanted to buy entire Heartwood releases to re-sell in their local markets (and he turned them down, which is awesome). But he has his feet planted firmly on the ground, he's not going anywhere, and as always quality is king: if a whisky isn't ready for bottling, and/or he isn't entirely happy with it, it doesn't get bottled.

I did cover more of the details in Part 1 of last year's adventure, and in previous reviews, but let's refresh our memories! Tim purchases new make spirit from a number of different Australian (primarily Tasmanian) distilleries, and matures them long-term using full-size 200-litre and larger casks, before bottling them at natural cask strength, without any adding anything or taking anything away. His methods are a little unusual and unorthodox, including literally beating and verbally berating his whiskies, and/or moving them into the 'sweat box', the hottest area of his bond store, to bring them into line. Heartwood's past releases have been some of the oldest and highest strength Australian whiskies ever bottled, such as the 15-year old and 73.5% ABV 'Devil in the Detail', and if a cask isn't up to Tim's standard he has no hesitation in blending them in with other casks or moving them into a fresh cask to fix any shortcomings. 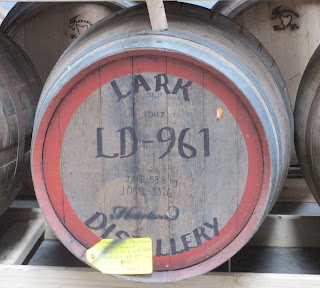 The 'Smoking Gun' - one to look out for!

He actually starts this process when he tastes the new make spirit, identifying what the spirit needs to meet his desired standard and dinosaur-shaped style, e.g. more length or more sweetness, and puts that plan into action when he sends the cask/casks for filling. It's important to note that this is actually rare among many independent bottlers, who typically buy filled casks of already-mature or maturing whisky from the distilleries, and either mature them further themselves or bottle and sell them straight away. Tim's quite modest when it comes to his own abilities and talents, but there's absolutely no doubt that he knows what he's doing. And there are plenty of awards and tasting panels, not to mention a growing legion of die-hard fans, who can attest to that! 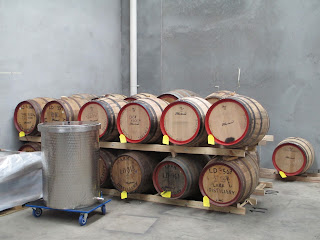 I think I know how Indiana Jones felt when he found the holy grail...

During this visit I was actually lucky enough to get a peek inside the inner sanctum, the holy ground that is Tim's bond store! And I was treated to a few very special nips straight from the cask, that won't be ready for bottling for some time yet. These included the current iteration of what was to be Beagle 4, and the sulphurous and astringent casks that were responsible for it being held back, which are currently being finished in fresh heavily-charred sherry casks to fix them up (and apparently they've already improved substantially). I was lucky enough to taste the current iteration of the next Dregs release, and a delicious future release which was only 3 years of age at the time, but has spent those 3 years in an Australian dessert wine barrel. The plan is to aptly name this one "Smoking Gun" thanks to it being 100% peated Lark spirit aged in a muscat cask (which is pronounced like 'musket'...), and it'll definitely be one to look out for. Hell, it's pretty much ready now if you ask me! Oh and speaking of Dregs, as an interesting little point, the iridescent labels on these very limited releases (the second batch will be yellow rather than green) cost a whopping $15 each to have made! Just something to bear in mind next time you're admiring the collection. 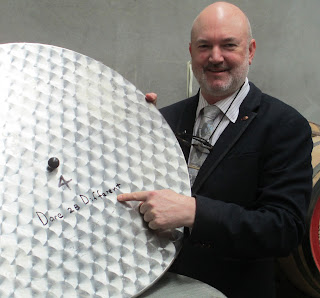 The proud father himself!

I was also treated to a nip of the very tasty bourbon cask-matured 'We are Cousins' bottling that was due to be released in the coming days (and is now sold out), and a couple of nips of the incredible Dare to be Different that was already in the decanting vat, and which has since been bottled and subsequently sold out! Tim has actually declared that this is (or rather, was) his best release yet, and while I haven't tasted it since my visit, I don't doubt that it'll be right up there. It was fresh out of the 'sweat box' at the time I tasted it, and while the initial taste was already very good, Tim then grabbed the paddle that he often smacks his whiskies around with, and gave the vat a stir before I tasted the contents again. There was a definite and noticeable difference! It makes sense of course as some of the heavier compounds will settle towards the bottom of the vat (and the same would also happen in casks), but it was a very interesting demonstration of yet another aspect to consider in the art of whisky making. 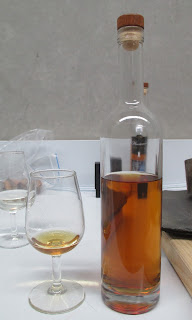 We are Cousins. Lovely stuff.

Since this is the final instalment in the Tasmanian Whisky Adventure, I've decided to review a very special Heartwood which followed roughly the same recipe as the Dare to be Different, but the end result is actually quite different (get it). This release was named Mediocrity be Damned, and is an almost 8-year old, 100% peated single malt from Lark Distillery that was matured in an Oloroso sherry cask. It was bottled at a pretty substantial cask strength of 67.2% ABV, and of course is not chill filtered or tampered with in any way, and of course is completely sold out. This bottling was dedicated to Lyn Lark, who along with her husband Bill is pretty much responsible for the existence of Tasmanian whisky as we know it! 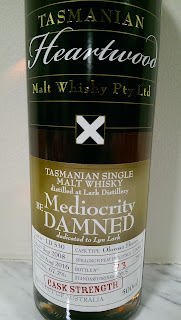 Finish: Long. A little spirit-y and drying, but in a pleasant way. Then a little tannin, stone fruit syrup lasting for quite a while, and more oak & spice. Hint of soft earthy peat. Quite subtle, but still complex.

Notes: Delicious, as always! This being the first 100% sherry cask-matured Heartwood I've looked at this closely, I wasn't entirely sure what to expect, especially considering my love for the port cask-matured releases. But this is a beautiful whisky, and it certainly lives up to its name! It is definitely different to the Dare to be Different, despite it following the same recipe, although I haven't tasted the bottled version of that release yet. From what Tim has been saying, it's even better than this one, which is very high praise indeed! If you manage to find a bottle of either of these releases out there, it almost goes without saying, I'd recommend that you grab one while you can!

I can't wait to see what Tim Duckett comes up with next, although it sounds like there may be a few months' wait until we find out what that is! But having tasted a few potential future bottlings, I have no doubt they'll be well worth the anticipation. I know I'm repeating myself, but I still believe Heartwood bottlings to offer the best value for money you can find in Australian whisky. Yes they're expensive releases, and they're only 500ml bottles, but for the level of quality and the massive flavour experience you get in return for your hard-earned money, they're worth every cent. And remember, you're getting the true natural cask strength in these bottlings, presented in the most natural way possible. Outstanding stuff.

Love your work Mr. Duckett, and thanks for taking the time out of your busy schedule to give me a peek inside the inner sanctum. Keep 'em coming! 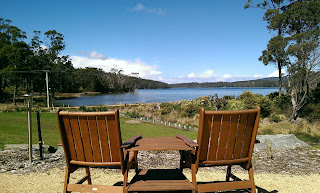 So, this brings chapter two of the Tasmanian whisky adventure to a close. While I'm sure there'll be more chapters added in the future, I'm already missing the place. If you haven't visited the whisky isle (forget about the apples), get yourself down there and take a look. Chances are you'll love it just as much. 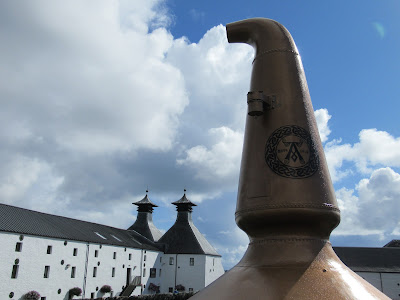