So, after a run of Islay peated whiskies, I thought it was time to review something different. If you haven't heard of Connemara, that could be because it isn't Scotch! Connemara is Irish whiskey (they spell it with an 'e' over there), and it is the only peated single malt Irish whiskey (that feels weird!). It is produced at Cooley distillery, located on the Northern Irish peninsula, a short swim across the Atlantic from Islay.

Most of their whiskey is bottled at a young age, around 3-5 years, and the distillery itself is relatively young, having only started production in the late 1980s. Interestingly, the barley used is 50-ish ppm peated malted barley, and is sourced from Port Ellen maltings on Islay, Scotland. This is essentially the same malted barley used by the Islay peat kings such as Ardbeg, Laphroaig and Lagavulin. The reason for this is that Ireland does not produce any peated malt of it's own.

Not wanting to produce such a heavily peated whiskey, Cooley distillery then blend the Islay barley with local un-peated barley, producing a whiskey which is considered to be lightly peated, at around 20ppm phenols (Ardbeg is normally around 50-55 ppm for reference).

The exception is the 'Turf Mor' (meaning 'big peat') expression that I'm reviewing today, for which they use only the Islay barley, peated to around 50-60 ppm. Although it does not have a printed age statement, it is believed to be matured for only 3 years. 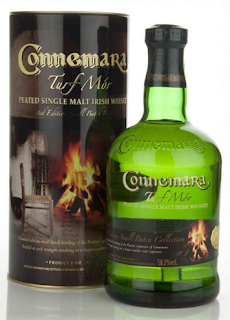 Nose: Big medicinal peat, very similar to Laphroaig but with only a little smoke. Some dry grass & farmyard-y notes, apples and honey sweetness. Not a lot of heat for such a young whiskey at ask strength.

Taste: Big hit of that medicinal Islay peat, again not as much alcohol heat as expected, suggesting good quality spirit and casks. Big, sweet smoke with some honey sweetness, and some decomposing vegetal notes. The peat fire dominates all in the mouth, keeping any other flavours slightly hidden from view, cowering in the shadows.

Finish: Light and clean, very warming, and peaty until the end.

Notes: Not a great deal of complexity in there, I think it would benefit hugely from a few more years of maturation, even if it meant losing some of the peat influence. Having tried the standard Connemara bottling, I actually prefer it, despite the considerably lower peat content. It stands further apart from it's Scottish mates. At this age, strength and peating level the phenolic portion of the Turf Mor is, I feel, too similar to those flavours found in some of it's Islay cousins.

Still an interesting peaty beast though, and worth trying for something a little different. Would love to try their Cask Strength and the 12yo  versions of the standard Connemara, I think they would both be a further step in the right direction. But if you do spot a Connemara out there in the wild, be sure to try some!
Posted by Peated Perfection at 23:30