I recently had the privilege of attending the Australian launch of Knob Creek Rye Whiskey (yes, the Americans spell it with an E), along with a 3-course meal, and tastings of the aforementioned Knob Creek Straight Rye Whiskey,  9yo Straight Bourbon, and Single Barrel Straight Bourbon. Something a little different for me, and it's no mean feat to get me out of my own suburb mid-week, so this is definitely something worth writing about!

Completely new to me, this place won Queensland Bar of the Year in the Australian Bar Awards recently, so it is definitely popular, and I can see why. I'll be back! The relaxed, open, funky vibe, fantastic live blues act and delicious food (think Po Boy sandwiches, Gumbo, Slow roasted American BBQ, etc.)made for an excellent spot to sample some quality Straight Bourbon and Straight Rye American Whiskey.

Before we dive into the tastings, let's have a look at American Whiskey itself, as it's not a subject I've touched on before. While I've sampled other high-end bourbon previously, it has only been at Whisky shows, and when surrounded by so much Scotch Malt Whisky, I've found it hard to devote my full attention to anything else! So, time for a closer look.

The Knob Creek range consists of the 9yo straight bourbon, the single barrel straight bourbon (also 9yo), the straight rye whiskey, and a smoked maple blended straight bourbon whiskey, termed blended because of the added flavouring (not sure about that one, although the smoked part sounds interesting). I haven't tasted the latter, and it likely has not been released in Australia, so we'll leave it out for the time being. Produced at the Jim Beam distillery in Kentucky, USA, Knob Creek whiskey is part of Jim Beam's small batch range, distilled in a separate building to the more mainstream/mass-produced products. Bottled at higher than usual % ABV (50%, or 100 proof), aged for considerably longer than both (up to 9 years), and aged in heavily-charred barrels (the heaviest char used in whiskey production, termed a level 4 char), the brand is aimed at the high-end American Whiskey buyer. So, enough already, on with the review!

On arrival, guests were handed an original cocktail, crafted by the Papa Jack's crew, containing the Knob Creek Rye, Aperol, an Italian Aperitif, coconut falernum, a sweet syrup, and saline solution, essentially salt water. Although a little sweet for my tastes, this was a great precursor to the coming whiskey and creole food.

Next up was the Knob Creek Straight Rye Whiskey, which is bottled at 50%, and although it does not carry an age statement (the label only states it is aged 'patiently'), as we know from the above it must be aged to a minimum of 2 years.

Nose: Banana, wood, and considerable spice. A little youthful ethanol on the nose.
Taste: More spice and oak, not overly sweet, and easy drinking at 50%. Water brought out more wood and caramel, and dialled down the spicy notes a little.
Finish: Short and spicy, a little hot.
Score: 3 out of 5 (American whiskey score)

The Rye was matched with a smoked duck gumbo, essentially a creole-style savoury stew, with rice, smoked duck breast and sausage. The spicy flavours in the whiskey bought out more spice in the gumbo, and the sausage and duck were awesome in their own right.

Next we were presented with the Knob Creek 9yo Straight Bourbon, also bottled at 50%, and aged for 9 years in the heavily-charred oak barrels. This was considerably smoother and more complex than the rye, with a great texture and finish. The extra time in the barrel shows here.

This was paired with a lightly smoked beef brisket, with Knob Creek whiskey added to the brine, and corn served with a salted whiskey caramel. The brisket was truly delicious, with a nice light char around the outside, a delicate smoke flavour and was very tender. The corn with salted whiskey caramel was a little odd, perhaps a little too sweet with the sauce.

Our final tasting of the evening was the Knob Creek Single Barrel Reserve, bottled at 60%, and aged for 9 years in the same level-four charred barrels. This was a big beast of a bourbon, very strong and spirited. I was excited to try this one, as it is un-chill filtered, which is quite unusual for an American Whiskey, and indeed it did have a nice haze in the glass when watered down enough.

The Single Barrel was matched with a delectable, rich, sweet banoffee pie, with sticky caramel, whipped cream & marshmallow on a ginger biscuit base. The ginger and caramel worked well with the big strong bourbon, bringing out more complex flavours.

As you can see, the standard 9yo was the star of the show for me, well balanced and complex, and easy drinking with a great texture. The new straight rye whiskey was the runner up, with nice wood and spice notes, although I feel it could benefit from a little longer in those heavily-charred barrels. The single barrel was just a little too hot and aggressive for me, perhaps held back by the higher ABV%, even with added water. Normally I would praise a higher-alcohol bottling, but in this case I preferred the standard version. 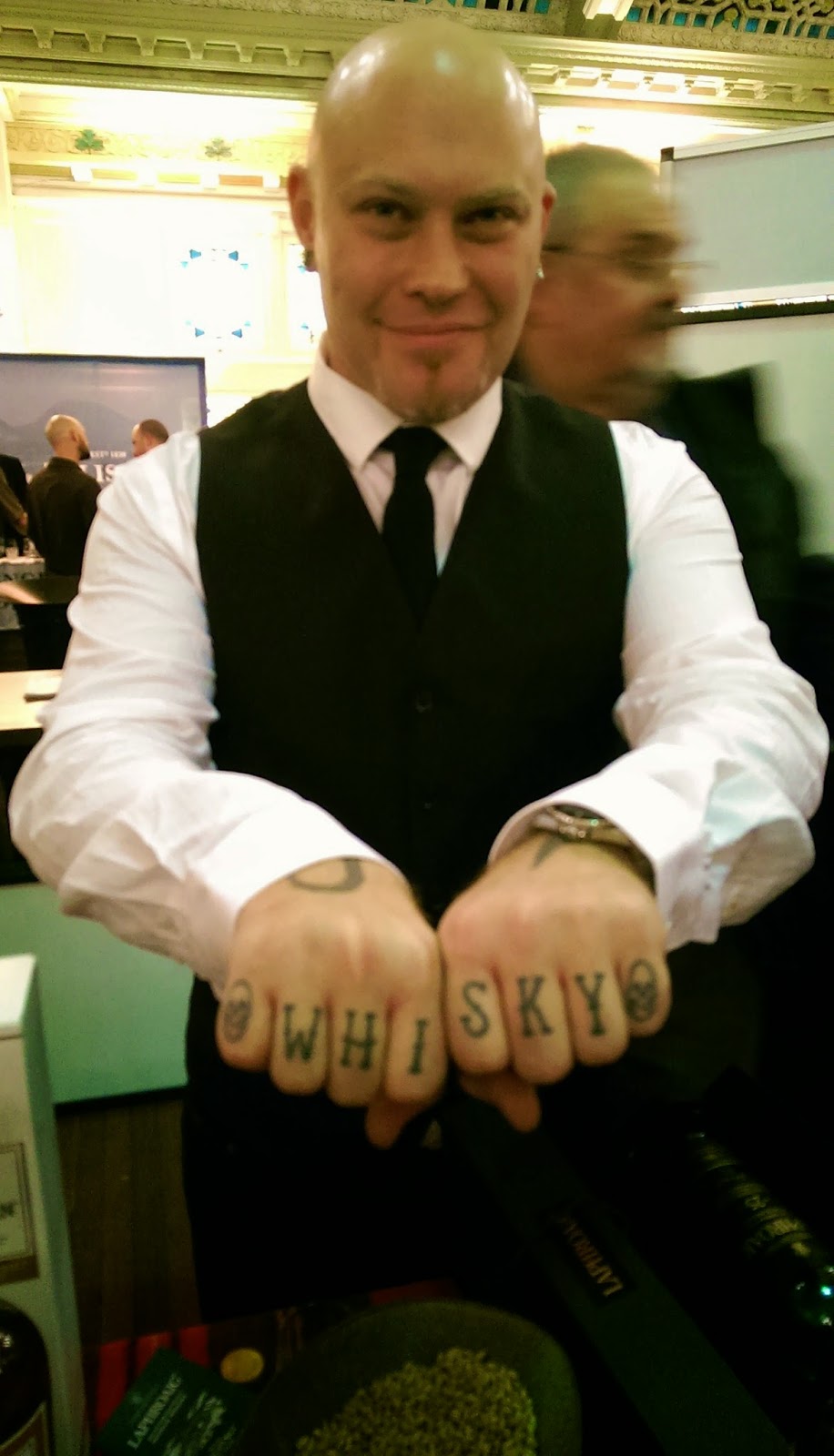 Our guide for the evening, Mr. Dan Woolley (who I've dubbed the Whisky Lord-aside from the obvious indicator above, he reportedly has one of the largest whisky collections in the country), was a great presenter, relaxed and approachable, preferring to give the thirsty hordes only the essential information, rather than rattling off scripted and rehearsed marketing verses, then opening the floor to keep the audience involved and engaged, while keeping the event moving at a comfortable pace.

Overall the Knob Creek Rye launch & tasting was an excellent event, the venue and quality of meal were excellent, helping to keep the conversation, and the whiskey, free-flowing. It was a great opportunity to try some high-end American whiskey in an American-style environment, and I thoroughly enjoyed the experience, it certainly broadened my whisky horizons, which of course is the name of the game!

A quick thanks to Dan Woolley, Knob Creek American whiskey, and Papa Jack's, for putting it all together. I look forward to the next one!

Cheers.
Posted by Peated Perfection at 22:11 No comments:

So, my final review in the blended scotch mini-series is here, and I have saved the best until last! Unfortunately it has been discontinued for quite some time now, and is selling at around $400 Australian (and up) on Ebay, which is insane! From memory I paid around $60-70 for the bottle a few years ago, which was great value at the time. This blend really could compete with, and trounce, similarly priced single malts.

The Green Label Johnnie Walker is a 'blended malt' or 'vatted malt' scotch whisky, which means it only contains single malt whisky, from different distilleries, and does not contain any grain whisky. There is no other blended malt in the Johnnie Walker line-up, their entire standard range now contains a varying proportion of grain whisky.

It is also unique in that it states clearly on the box where the 'key component' malts originate from. To my knowledge, it is the only Johnnie Walker whisky to do so, and not many blended malts can claim this either. These key components are listed as Caol Ila (from Islay), Talisker (The Isle of Skye), Cragganmore (Speyside) and Linkwood (Speyside).

It is also quite unique in that it is (was) bottled at 43%, rather than the standard 40% of the other standard Johnnie Walker expressions. It also carries an age statement, with each malt being at least 15 years old. This really is a well presented malt for the whisky enthusiast, and it's a shame it has now all but disappeared. But, for the sake of reminiscing, let's have a closer look at Green Label.

Nose: Sweet honeyed malt, a little smoke and some floral notes. Some oaky sweetness, pepper and a veil of smoke.

Finish: Honey and pepper, lovely and malty. Could be longer, but not bad!

Notes: Definitely my favourite Johnnie Walker whisky, it was great value and very enjoyable. My bottle of Green Label is nearly empty now, but I won't be paying $400+ to replace it! It has become a collector's special at those prices. It was replaced by the 'platinum' 18yo and 'gold label reserve' NAS blended scotches, and while the platinum is quite enjoyable, at a significant jump in price, even it cannot match the complexity and balance of the dearly departed Green Label.

If you do happen across a bottle of this, and it's at a reasonable price, grab it. You can always sell it on for a massive profit, to someone who will likely never open it.

P.S. Stay tuned in the next couple of days, I have something very different and very interesting in the pipeline! Watch this space...
Posted by Peated Perfection at 23:23 No comments:

For part 2 of my (short) 3-part series of blended whisky reviews, I chose something a little less well-known, and certainly less-marketed. Black Bottle blended Scotch whisky has been around since the late 1800's, but has existed in many different styles, and with different components. The version I'm reviewing here has recently been replaced as well, from all reports with an inferior blend (refer to the below photo for clarification).
Produced by Burn Stewart distillers, who own Bunnahabhain distillery, among others, this version of Black Bottle (so named because older versions were in black glass, or black plastic-coated glass) contains, as stated on the bottle, "A blend of Islay single malts with highland, lowland, and speyside malt and grain whisky". It certainly contains a good amount of Bunnahabhain single malt, but the specifics of the other components are a bit of a mystery. While it is a Non-Age Statement bottling, it is believed to contain 7 year old whisky. There have, in the past been, 10 and 15 year old versions, but these are now discontinued.

As we discussed in the previous review, Black Bottle is a blended scotch whisky, as it contains a portion of single malt whisky blended with grain whisky. On to the review!

Texture: A little thin, but clean and warming. Not bad for a 40% blended scotch.

Finish: Short and peaty, a hint of ash, then mild honey sweetness.

Notes: A decent blend, certainly one of the best peated blended scotch whiskies (containing grain whisky) I've tried. It would be a good introduction to peaty, medicinal, 'Islay-style' whisky, and at a good price (around $50 here in Australia). As with most blends though, it would be massively improved by increasing the percentage of malt whisky content, higher ABV %, and losing the chill filtration. I haven't tasted the new version personally, but I hear it has gone backwards and lost some peat, which is unfortunate. If you come across this version (first choice and vintage cellars usually have it in Australia, but probably not for long), and are after a cheap and cheerful peat fix, grab it.

Cheers!
Posted by Peated Perfection at 22:47 No comments: