Ah, Lagavulin. Undoubtedly one of the greats. They seem to have been ramping up their marketing a bit lately, through owners Diageo, with multiple appearances on popular TV shows and movies, and advertising (see below).

And yet, the distillery only offers two bottling's as regular releases: the 16yo, which is loved all over the world, and the distiller's edition. Yep, just those two. But to be fair, those two are pretty good!

The standard (and excellent) 16yo is matured in ex-bourbon and ex-sherry casks, and the distiller's edition is the same whisky finished in Pedro Ximenez (PX) sherry casks for around six months. Lagavulin use malt sourced from Port Ellen Maltings, as you would expect. They unfortunately chill filter, and add some caramel colouring to, their standard releases,which are also bottled at just 43%. That might not sound very appealing, but both are still quality malts.

So is the title of this review a typo, then? No, no it isn't. You see, Lagavulin also produce a few 'special release' bottlings. There is the annual Feis Ile bottling, the 2013 release of which is among my all-time favourite whiskies (other releases may be as well, but I am yet to taste any of those). There is also a 'triple matured' (matured in three different casks) bottling, which you can only buy at the distillery itself. And, there is the one I'm reviewing today, the 12yo. Some whisky fans have never heard of it, and it keeps a ridiculously low profile compared to it's older brethren. Oh, and one more little detail, it's bottled at cask strength!!!

Yes, that's right, cask strength Lagavulin, without going to Feis Ile and lining up at the distillery, or buying at auction at a hugely inflated price. Released annually as part of Diageo's 'special releases' range, it's also one of the most reasonably priced. Bottled at 12 years of age, without added colouring, and without any 'secondary maturation' or 'finishing'. Just Lagavulin's brilliant spirit, matured for 12 long years in ex-bourbon casks, and bottled at natural cask strength. I also don't believe it to be chill filtered, but I can't find any offical word on this, so I can't be totally sure. The packaging is hardly any different from the 16yo, but you can't judge this book by that cover. Or the colour, for that matter.

The bottling I'm reviewing here is the latest 2014 release, which was bottled at 54.4%, and is selling for around $160 in Australia, at the moment. That may sound like a lot of money, and it is, but compared to the $200 asked for Lagavulin's distiller's edition, at 16-and-a-bit years of age and just 43% ABV, it's very good value. 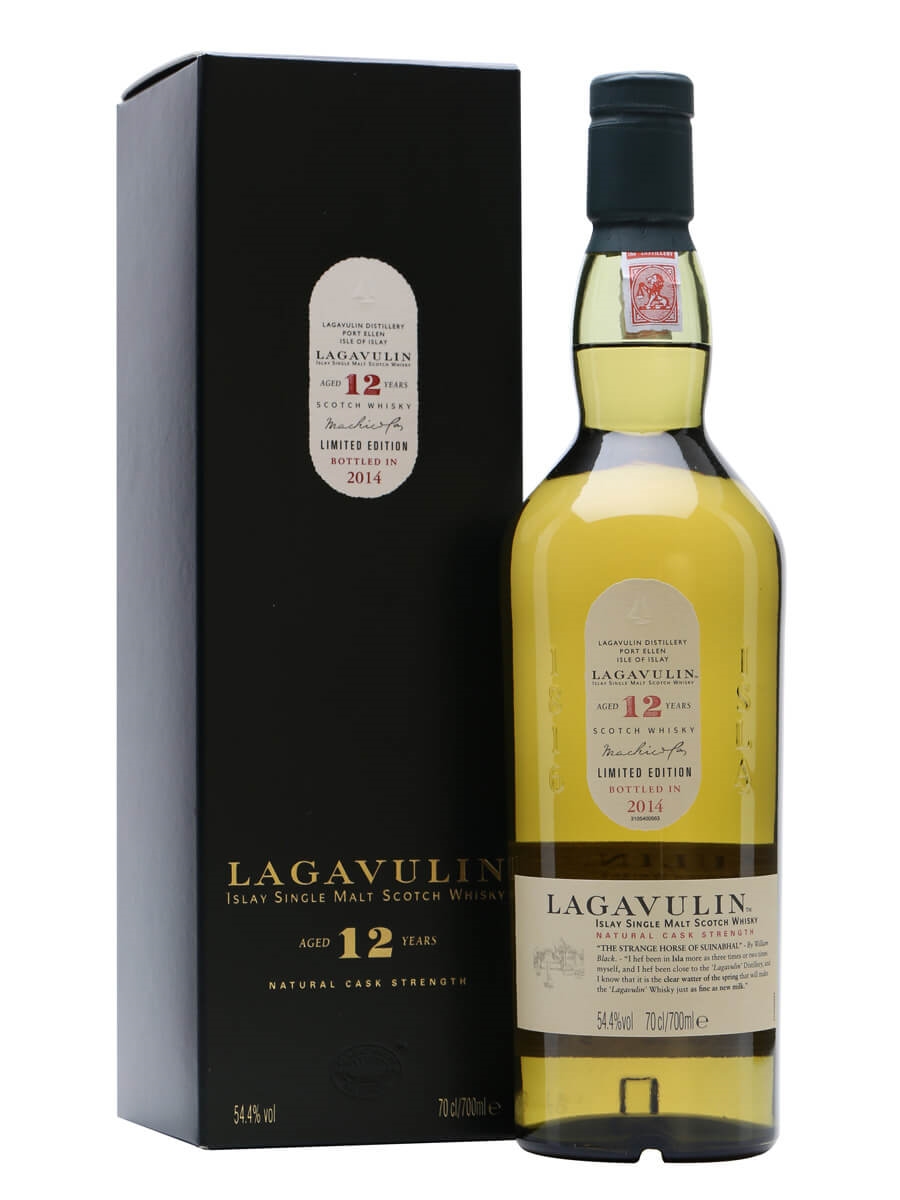 Texture: Rich and syrupy, near-permanent legs in the glass.

Notes: Great stuff. If you haven't tasted a 12yo cask strength Lagavulin yet, put it on your list. Somewhere near the top, particularly if you're a Lagavulin fan. But then, who isn't? The nose is just fantastic, the distillery character still shows, but it's so fresh and confident. That was the highlight of the show for me, I could nose this stuff for hours.

A true Islay heavyweight, I would have no trouble putting this one up against the likes of Ardbeg Corryvreckan or Laphroaig 10yo cask strength. And that's high praise indeed. As with those two, adding water would probably give a little more complexity, but personally, I don't care. Heavyweights should pack a punch, after all.

There is some minor variation between releases / years with the Lagavulin 12, but there's not a lot in it. From (vague) memory I liked the 2013 release slightly better, but very slightly. My advice is to get what you can get without paying auction prices, and enjoy it. Speaking of which, the best price I've found for this 2014 release is here, and it's still quite a recent release. Enjoy...

Cheers!
Posted by Peated Perfection at 22:14