This is one of my bucket list drams, which is now very rare and worth mega-bucks. Thanks to a very generous fellow whisky geek, I finally have the chance to try it!

This is, or rather was, the original version of Ardbeg's extra-heavily peated Supernova. Hitting the shelves back in April 2009, it was quite a large release at the time, consisting of some 18,000 bottles. But that was seven long years ago, and it is now extremely hard to find, and very expensive. It also won a couple of major awards at the time, including the whisky of the year from the hat wearer (who makes it sound like he built Ardbeg single-handedly back in 1815), which of course added to it's popularity.

The Supernova range is peated to 'well over' 100 ppm on the malt, a big step up from Ardbeg's usual level of around 50 ppm, although in fairness that's still quite high. The recent additions to the Supernova range have gotten a little soft though, with the addition of more sherry-matured whisky in 2014 (reviewed here) and the final 2015 release, and I suspect some slightly older contents as well. And both of those releases were also down to 55% ABV.

But this 2009 version, sometimes referred to as the 'stellar release', and the subsequent 2010 release (reviewed here in the early days) were true peat-monsters; young and high-strength, big and powerful (dare I say explosive?) Islay beasts. 100 ppm may not sound like a lot these days, largely thanks to Bruichladdich's Octomore series, but there are more factors that will influence the actual level of peaty power than that one number. So rest assured, this one is definitely a contender for Octomore's crown.

There's isn't a lot of detailed information about this release around, and you won't find any mention of age, casks or colouring on the packaging. But you will find mention that it is non-chill filtered, plus the slightly ambiguous 'well over 100 ppm'. I don't believe it has had any colouring added, Ardbeg don't do that as far as I'm aware, which is one of the reasons that they use a green bottle. And I would guess that it's ex-bourbon cask matured, most likely in refill casks to retain as much peat influence as possible in the finished product. But I could be wrong there, so we'd better take a closer look. Very excited to finally try this one! 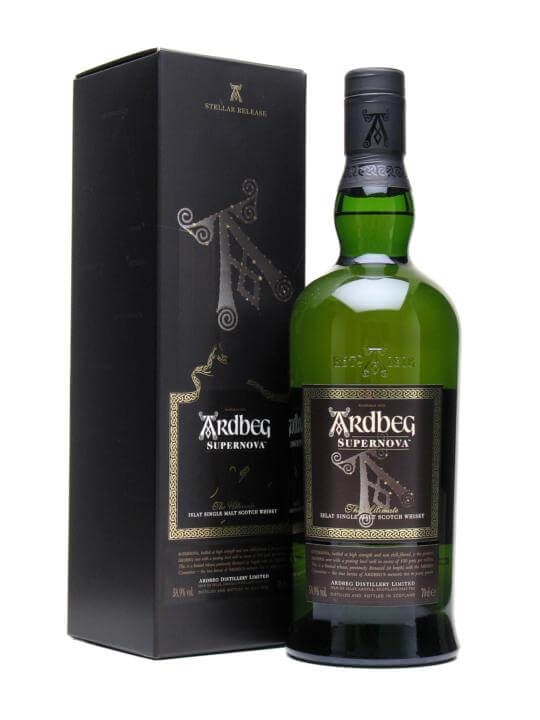 Nose: Fantastic. Very Ardbeggian. Lime zest & black pepper, creamy peat, and creamy vanilla ice cream by the sea. Some ash, soil & tar, and a little spirit-y bite. So far not as peat-forward as the numbers might suggest, but oh-so beautiful.

Taste: A big peat explosion, as promised! But it's still a lovely creamy peat. Seriously lovely. Some dry, hot ash, a touch of chilli chocolate. Some more lime and black pepper too, and a slight hint of pineapple.

Finish: Long! Starts with the dry, hot ash and black pepper, then that gorgeous creamy peat comes to the fore. Then some chilli flakes, a little more candied lime, salted potato chips, and a smouldering peat fire.

Notes: Seriously good stuff, and now I'm kicking myself that I didn't hunt high & low a few years ago and pick one up when they were more available and within reach. It's a proper Ardbeg, un-tamed and un-apologetic, with plenty of complexity and power. Based on my admittedly limited experience in the older whisky field, I'd call it an old-school Ardbeg when compared to today's offerings, and I feel very privileged to have finally tasted it. Although it's now left me wanting more!

The 2010 'nova was the first mega-peated whisky I tasted (and subsequently bought), so this one also reminded me of those early days. But how do they compare? From that I remember of the '10, it was nowhere near as creamy or lime & pepper-y, and not as complex or balanced. And it was certainly hotter, more than the ~2% difference in strength would warrant. I do definitely prefer the '09 bottling, it's an absolutely beautiful Ardbeg, and I'm smitten with the stuff. Now where did I put that damn time machine...

While we're on the subject, this year's Ardbeg Day is coming up, on the 28th of May. They're actually calling it 'Ardbeg Night' this year, linking it with the marketing theme behind this year's Ardbeg Day special release, Dark Cove. I've reviewed the 55% ABV committee release version here, which has since sold out world-wide. I was very impressed with it, but the general release version which is released on the day is down to 46.5%, and it looks like it'll actually be more expensive than the box-less committee release, at least in Australia. Regardless, if it follows the lead of the 55% version, it'll definitely be one to try.

Cheers!
Posted by Peated Perfection at 18:26