Some of you may remember last years' Tasmanian Whisky Adventure. Well, my wife & I loved the place so much that we went again this year, and I managed to visit a few of the distilleries that I missed last time, so here starts chapter 2 of the Tasmanian Whisky Adventure! This will be a four-part chapter, and as with last year, I'll be giving a little history and further details on the distillery, and reviewing one of their whiskies. 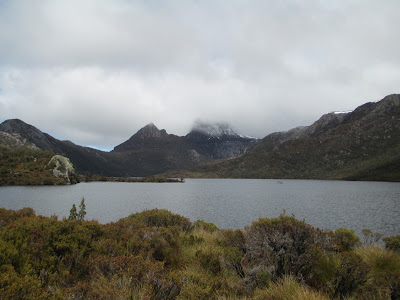 The last Tasmanian adventure was in the middle of winter, which was very cold, windy and even snowy, so we thought we'd go a little later in the year this time. Aiming for late spring, we assumed the weather would be milder. In reality it was only slightly milder, with a few beautiful sunny days mixed in with the new additions of more rain, grey skies and even stronger winds, but it was still very pleasant and very beautiful, and the weather certainly didn't dampen spirits at all (get it?). In fact I have no doubt this adventure will have even more chapters added to it in the future. 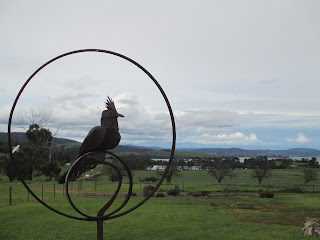 The first stop for this chapter is the original Tasmanian whisky distillery, Lark. But before we get into the distillery itself (since the two are linked) we need to briefly cover the history of Tasmanian whisky. We essentially have one man and wife duo to thank for the existence of Tasmanian whisky in its current form: Bill Lark, the Godfather of Australian whisky, and his wife Lyn. In fact I had the honour of briefly meeting the humble couple on this trip, and despite having consumed a few quiet beverages at the time, I made sure to thank them both for their efforts. It was Bill who first realised that Tasmania was the perfect environment for making whisky in the early 1990s, with clean soft water, a supply of good quality barley, the ideal climate, and even its own peat bogs. But there were a few hurdles to get over before things could get underway.

Distillation had been illegal in Tasmania for over 150 years, and the federal distilling act also proved a massive obstacle, making distillation illegal in stills under an industrial-sized capacity. Bill took the issue to his local member, who took the issue to the federal customs minister, who had the laws altered and enabled legal distilling in Tasmania on a more realistic scale. Bill then obtained his distilling license, and started Lark Distillery in 1992, at the site which is now the Lark cellar door (and also an excellent whisky bar) in Hobart. In fact when you think about it, without the Tasmanian whisky industry paving the way, would we have an Australian whisky industry? I don't think so, or at least not to the same extent that there is today. So we fans of Australian whisky owe quite a lot to the 'why not?' attitudes of Bill & Lyn Lark. 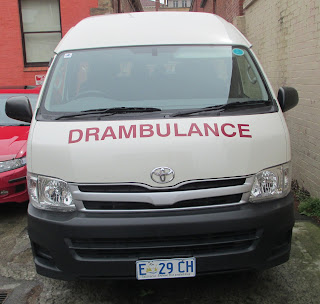 These days the distillery is located in the coal river valley area near Cambridge, around 20 minutes drive North-East of Hobart. While the distillery itself is not open to the public, organised tours leave twice-daily (in the 'Drambulance' pictured above!) from the cellar door in Hobart, and give a much more in-depth and hands-on experience than most distillery tours. And there's no need to organise a designated driver, so no-one misses out! There is a choice of the standard tour which runs for approximately two hours, or a full-day catered 'premium experience' which will also have you put to work in the production process, helping to actually make Lark single malt whisky. I attended the standard tour, which certainly gives a close and more technical look at the distillery's operations.

In fact where possible the tours are timed to witness the cuts being made during the spirit runs, and often include sampling of the brewing wash and the resulting new make spirit as it comes off the still, while learning about the process from the distillers themselves. You'll also be treated to a couple of samples drawn straight from the cask, surrounded by slumbering whisky in one of Lark's bond stores (warehouses). You'll also see Lark's peat smoker in action, pictured below, which gives some perspective on the size of this distillery compared to the massive kilns in use in the Scottish distilleries and commercial malting facilities. 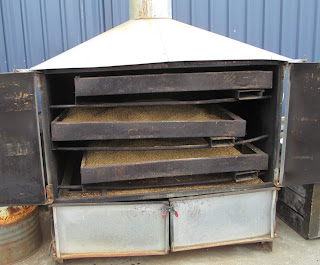 Lark's peat smoker in action. What a wonderful aroma!

The Tasmanian barley used is sourced from Cascade brewery in Hobart, and has already been dried in the malting process, so the malt is re-wet and dried in the above peat smoker to a level of around 8 ppm. Thanks to this different process the peat influence is only light, roughly equivalent to a Springbank or Benromach level, but with the different flavours resulting from the Tasmanian highland peat it's a very subtle influence. This extra-step also means that the peating level can be varied between batches (and heavily peated batches are currently maturing), and the peated malt can of course be mixed with un-peated for an even lighter influence. Interestingly, Lark lease an area of one of the largest peat bogs in Tasmania, in the Western Highlands, and despite needing a relatively tiny amount of peat for their requirements, they had to acquire a mining license from the Australian government (not a cheap or easy process I'm sure) to be legally permitted to harvest it.

Lark is essentially using town water in their whisky production, which is very clean and soft in Tasmania, although they are a little unusual in that they are producing and brewing their own wash (the basic form of beer that is then distilled to produce whisky), rather than purchasing 'pre-made' wash from one of the local breweries. Lark also supplies wash to Old Hobart Distillery (Overeem whisky), although the methods and ingredients are a little different as per Overeem's requirements. After the seven-day fermentation process, the wash is double-distilled in Lark's two copper pot stills, and interestingly the wash still uses a worm-tub condenser, much like Mortlach or Benrinnes, while the spirit still uses the more common shell-and-tube condenser. The reason for this is to achieve a compromise between the heavier spirit (or low wines, in this case) produced by the worm-tub condenser on the larger wash still, and the lighter spirit produced by the more modern and more efficient shell-and-tube design on the spirit still. 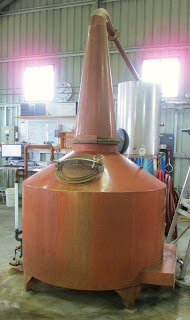 Once the cuts have been made from the spirit run, the new make is then filled into casks, with 100-litre re-coopered Australian port casks being the preferred type & size, although Lark also fill ex-bourbon, sherry, brandy and rum casks, among others. And at no stage are any of the whiskies chill filtered or subjected to added colouring. While most of Lark's whiskies don't carry age statements, they are usually bottled at around 6 years of age, although this varies depending on cask size and a few other factors, and of course the maturing whisky is given a boost by the indecisive Tasmanian climate. During our tour we were treated to samples of Lark's 'classic cask' and 'cask strength' expressions, which are matured in a mix of first- and second-fill ex-port and ex-bourbon casks, as well as cask strength drams drawn from a 20-litre ex-port cask (my pick of the bunch) and a 20-litre ex-bourbon cask, and thanks to distiller Craig's generosity we were also treated to a surprise nip of one of the 'special releases', a very interesting apple brandy cask-matured whisky bottled at 46%. Not such a bad way to spend an afternoon, and it gave a very enjoyable insight into Lark's range of expressions and the effects of the different casks that are in use.

I stumbled across another of the 'special releases' behind the bar at the cellar door later in the trip, and since I knew I wouldn't get another chance to try it, I decided to review it on the spot for this write-up. As such my notes aren't quite as detailed as usual, and I decided not to score this dram out of fairness. This particular expression is the oldest official bottling released by the distillery, at 9 years of age, and was matured in a single ex-bourbon cask (cask no. LD240) from Heaven Hill distillery in Kentucky, before being bottled at 43%. It's certainly not cheap though, at around $450 AUD for 500ml bottle, and is only available from the cellar door in Hobart. 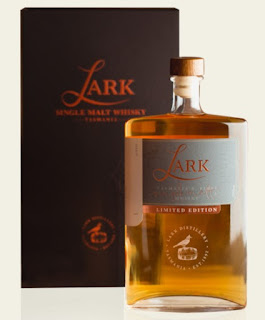 Texture: Light. Sweet and delicate, a little heat towards the finish.

Finish: Quite short. A touch of spirit-y heat, then more toasted grains, oak and vanilla.

Notes: A very different expression, which is unlike any other Australian malt I've had. In fact it's closer in comparison to a youngish ex-bourbon matured Scotch I think. I can't help but think I would've preferred it at a higher strength, but it's not unpleasant by any means. It's very easy-drinking and more laid back / delicate than your average Tasmanian single malt. It's a very expensive release unfortunately, but when it's roughly 50% older than most releases from the distillery, and single cask releases of this age are hardly going to happen often, you can understand why it's commanding a higher price. Besides, it's not far removed from the pricing from some of the other Tasmanian distilleries' bottlings.

I'm very impressed with Lark's entire operation. They may not yet have the massive international renown of Sullivan's Cove (although I'm sure that will change), but they're working tirelessly on trying new things and constantly refining their practices. They're also a very nice bunch of people, very professional and knowledgeable, and are clearly happy to be involved. The tour in particular was one of the best I've attended, it is a far more technical and inclusive experience than most, where you're actually talking to the people that make the whisky, while they're doing exactly that right in front of you, while explaining what they're doing and why. You're not fenced off at a distance or constrained by yellow lines, you're right in the middle of the stills and equipment, enjoying the sights, smells and tastes of a working distillery. If you ask me, this is an absolute must-do for any whisky fan. And make sure you allow plenty of time afterwards for a dram at the cellar door. And now I'm wishing I was still there...

Cheers!
Posted by Peated Perfection at 20:08