I've tasted a few whiskies from Jura Distillery, and so far they've all been quite disappointing. But they've all been relatively young official bottlings, so this cask strength independent bottling promises to be a little different...

Jura Distillery is located on the Scottish Isle of the same name, which is only a five-minute ferry ride from Port Askaig on our beloved Islay. The original distillery on Jura was dismantled in 1901 after around 90 years in operation, while the current distillery was built on the same site in 1963, making it one of the younger distilleries in the area. It's the only distillery on the island, which although quite large has a tiny population of around 200 people, and only a single road. Aside from the distillery, the island's only claims to fame are its large population of around 3500 deer, the three 'Paps of Jura' mountains, and the fact that George Orwell wrote his novel '1984' while living on the island. It's a rather obscure, quite remote and austere place, but there's also plenty of natural beauty, without masses of tourists or commercialisation spoiling it.

The distillery is currently owned by Whyte & Mackay, who produce quite a few blended whiskies, and also own Dalmore, Tamnavulin and Fettercairn distilleries. The distillery has four very tall stills, and has quite a large annual production capacity of around 2.2 million litres, with all barley sourced from Bairds commercial maltings on the Scottish mainland, and unfortunately they are big fans of both adding artificial colouring to, and also chill filtering their official bottlings. The distillery mostly produces un-peated spirit, although since around 1990 they have also been producing some heavily-peated (to around 30 ppm) spirit. The peated whisky is then either blended in with the un-peated to create the lightly-peated 'Superstition', or bottled on its own to create the 'Prophecy' expression (the only regular official bottling that is presented at 46% and non-chill filtered).

The bottling I'm reviewing today is a different story. An independent bottling from Signatory Vintage's cask strength collection, it's a 26-year old heavily-peated Jura, which was distilled in 1989 (which would mean it was one of the first heavily-peated casks filled at the distillery), and was bottled in 2016 at 59% without chill filtration or added colouring. While most whiskies in Signatory's cask strength series are single cask bottlings, this particular one is from two ex-bourbon casks, numbers 30736 & 30737, that were filled on the same day. This bottling is also quite the bargain for a 26-year old cask strength peated whisky, currently selling for $234 from Signatory's Australian importer, The Whisky Company, who generously provided the sample for this review. Let's give it a whirl! 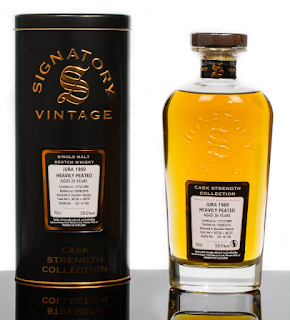 Nose: Interesting. Creamed honey, fresh herbs, a little acetone, and some dusty hay. A slight hint of fresh earth, and something a little acidic comes out with time - apple cider vinegar?

Taste: Spicy and honeyed, some burnt caramel and more creamed honey. Quite spirit-y as well, despite the age. Hot chilli flakes, and that strange acidic cider vinegar note again.

Notes: Not too bad really, quite interesting in fact, and still one of the best Jura's I've tasted so far. Very little peat influence here, but that's understandable considering the age and relatively low ppm on the malt (Ardbeg for example use 55 ppm malt, almost double that used at Jura). Even with what was obviously expert cask selection, this Jura still has quite a bit of heat present, which leads me to believe the initial distillation might have been a little rushed, and after all it would have been one of the early runs of peated spirit made at the distillery. Regardless, it's not unpleasant, even that strange sour note was quite enjoyable & almost refreshing.

Signatory Vintage really do know what they're doing, in fact they're quickly catching up with G&M as my favourite independent bottler. There are some great value malts coming out of their warehouses at Edradour, some from under-appreciated or slightly obscure distilleries (the beauty of independent bottlings) and the packaging and presentation for the cask strength collection in particular is very nice indeed. Great stuff, and we now have access to quite a good range thanks to The Whisky Company doing the hard yards for us and bringing in the good stuff. Thanks Craig & team!

Cheers!
Posted by Peated Perfection at 17:56