I'm back, and oh what a trip that was! London, Islay, Edinburgh, and Speyside via Inverness. To have actually visited these places that I've dreamt of for years was very, very special. And so was being able to finally get my own photos for your viewing pleasure! There are quite a few write-ups in the works at the moment of course, but I thought I'd ease back into it by reviewing two massive peat monsters from my favourite Islay distillery. Enjoy!

As whisky geeks, we always want what we can't have. It's human nature really. Old bottlings, discontinued bottlings, closed distilleries, and then also lower prices, more (or sometimes fewer) bottles, and lower taxes... the list goes on. This is not helped by the internet, where us Australians for example are constantly exposed to how much luckier those in Europe or the US often are compared to us. Not only do they get far cheaper pricing, but they also pay less tax and much less duty, and they don't usually need to wait 3-12 months before they finally see the latest bottling. But I could let all of that slide, as if there was a choice anyway, if we could just get one thing that the Europeans and particularly the Americans do: Laphroaig 10 Cask Strength. 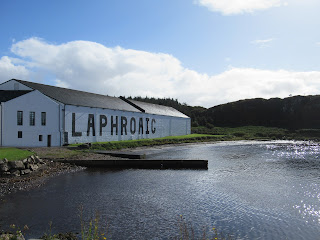 Yes, unfortunately the amped-up cask strength version of this Islay staple is not officially imported into Australia, and has not been for many years, if it ever was. I'm sure there are many of you out there who have never tried this magnificent nectar of the gods, and there are probably many who have never even seen the subtle red-striped label in reality. Those people might be thinking "well it's just a stronger version of the 10 year old, who cares?" or something along those lines. Believe me when I tell you folks, and I'm sure those who have had the pleasure will back me up here, you are unequivocally mistaken. To add insult to our injury, if we had access to this wonderful liquid at pricing similar to the US or UK market, and even with our increased shipping costs factored in, it would easily be the best value for money peated whisky available. They may not be the absolute most perfect whiskies money can buy, but for the sort of money they're asking overseas, I don't think there's much that can beat them. For example, in the 'States a bottle of Laphroaig 10-year old Cask Strength sells for around $65 USD, which is just unbelievable value. For the lucky Americans reading this, us Australians are being charged $90-100 AUD (that's around $67 USD at today's exchange rate) for the standard Laphroaig 10-year old, and that's bottled at 40%, not the that's-more-like-it 43% version that you also enjoy. Oh, and that's also in a 700ml bottle, not 750ml. It's just not fair!!!

Yes I realise we are a much smaller market, and we have a lot of shipping costs being on the other side of the world, plus we have a ridiculous amount of taxes and duty to cover, but the price you lucky buggers pay for the annual limited release of the cask strength 10 is just not fair to the rest of us. And a quick google will show masses of stock just sitting on the shelves of your bottle shops (sorry, liquor stores), which also just isn't fair. This leads me to think that many of you don't even realise how lucky you are, and it upsets me to think of all those homeless and unloved bottles sitting on the shelves collecting dust. I encourage those of you lucky enough to have the access to get out there and fix this injustice pronto, or failing that, just ship the stuff to Australia, we'll happily look after it for you.

The cask strength 10-year old is released from the distillery annually in unique batches, and it tends to sell out from the distillery itself very quickly. Which is probably because it's downright cheap, at 49 pounds including the 15% VAT, which is absolutely amazing value, and frankly is just too cheap! That really is enough to make you re-evaluate what you previously considered to be good value for money in the whisky world, and it certainly has done that for me. And yes, I did buy a bottle on my recent maiden voyage to Islay (luckily they had found some stock hidden away somewhere). As mentioned above, that price is around the same, or even less, than we Australians pay for the regular Laphroaig 10 year old at 40% ABV, so how could I possibly walk away from that deal! 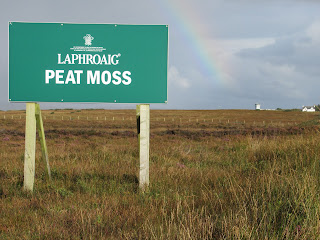 With a bottling strength generally in the range of 55-59%, and being devoid of the added colouring and (much more crucially if you ask me) chill filtration that the standard 10 year old is lumped with, these limited release bottlings are a huge step up from the 'normal' watered-down 10 that we all know. They're on a completely different level. Intensity of flavour, masses of sweetness, peat and smoke, and they're still extremely drinkable for the strength, and mature for the age. Remember also that aside from the very limited and understandably very expensive occasional special release (e.g. the recent 30-year old) and the annual Cairdeas bottlings, which are often also not officially imported into Australia, this stuff is the only way to find official bottlings of Laphroaig at over 48% ABV.

Currently up to Batch 9, although there were also some earlier batches that weren't numbered, the cask strength 10 can very occasionally be found in Australia as a parallel or private import (as in, bypassing the official importer and buying direct from an overseas supplier) in extremely limited quantities. The cost of this practice, plus the extreme scarcity of these bottles in Australia, mean that they usually sell for $250 a bottle or even higher. At this price level they obviously don't offer anywhere near the incredible value for money that they do overseas, and they also have some serious competition from other brands at that figure. But given the scarcity, and inherent quality that you're getting in that beautiful green bottle, they can be hard to resist for some die hard 'phroaig fans, even at that sort of price.

Anyway, enough whingeing, and onto the matter at hand. Not one, but two Laphroaig 10 Cask Strengths to review! Oh happy days! The samples I'm reviewing today came from two different sources, with the batch 6 (a.k.a 006) being a sample swap with a fellow Laphroaig lover, and bottled in February 2014 at a cask strength of 58.0%. The batch 9 (a.k.a 009) came from Beam Suntory's Australian national brand ambassador and all-round legend, Mr. Dan Woolley, who brought a couple of bottles back with him from Islay after a quick sojourn earlier this year. It was bottled in February 2017 at a cask strength of 58.1%, and it also sold out from Laphroaig's online store in a couple of days, although I'm sure the lucky American market will have their unfair abundance of stock lying around! As mentioned above, both of these bottlings are completely non-chill filtered, and I believe the E150a caramel colourant that is added to the standard 10, ostensibly for consistency purposes, is either skipped altogether or at least is dialled down in these cask strength releases. Awesome stuff. So let's get to it before I start weeping into my Laphroaig Glencairn... 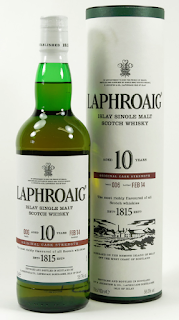 Texture: Boom, flavour explosion! More of a dry, spicy dram, but also quite complex. Medium weight, and no alcohol heat at all.

Finish: Long. The sweet fruit & vanilla returns, although the peat is still there in a big way. More of that spicy charred edge to it now, then a little bitter oak and toasted aniseed. Smoked fish on lightly buttered burnt toast. The grapefruit is still there too, but it's less sweet and more sour and slightly bitter now. Lovely.

Notes: Oh man, what a whisky! Very, very Islay if you ask me. The peat, smoke and salt are big, but so are the spice and coastal notes. Definitely more savoury, dry and spicy than some may like, but for my tastes this is just delicious.

Nose: Totally different. A little shyer than the former, with more dried citrus notes - grapefruit and lemon, sweet and relatively (yes relatively!) light on the nose. More of a dry, dusty, powdered peat here, with a little ash to it. Some strong tea, sweet vanilla cream, fresh herbs, and light wood spices. Burning charcoal briquettes and wood embers, and a little drying kelp, then a little sweet malt showing through!

Finish: Medium-long length, but again a little quieter than batch 6. Chilli salt and a dry wood spice, slightly bitter burnt toffee, and hot wood ash. More of that lovely semi-dried citrus, like a grapefruit concentrate and some lemon drops. A little sweet licorice, and sweet & smoky malt at the end.

Notes: Definitely a brighter and lighter (for a cask strength Laphroaig!) take, those lovely sweet citrus notes are very enjoyable. The peat is dialled back, as is the salt and spice, while the sweetness and ash is brought forward. Very nice!

Both of these are fantastic drams, and are almost surprisingly different, although both are still very Laphroaig-y, as you'd expect. These 10 year old cask strength Laphroaigs are like Islay concentrate if you ask me, and to an Islay fan they're just bloody delicious. We have two different styles of peaty whisky here really, batch 6 is definitely more aggressive, more dry, peaty and spicy, while batch 9 is a little more subtle and gentle (for a young-ish cask strength Laphroaig!) and less shout-y, more sweet and fruity, and still very, very good. I just wish these beasts were easier to get our (my) hands on...

I've also had the pleasure of trying batch 007 and 008, and both are/were very good, with batch 7 being my favourite up until tonight (now I'll have to arrange a side-by-side with 6 & 7!). Although it was slightly down in strength, it made up for it with loads of sweetness, and coastal salt & peat. I'd have no hesitation at all in lining any of these 'phroaig beasties up with any cask strength Islay whisky, including even the mighty Octomore. Needless to say if you're a peat-head and you come across a bottle of the cask strength Laphroaig 10 year old, grab it immediately and don't let go. Just do it!

If you're reading this Mr. or Mrs. Beam Suntory Australia / CCA, then please, please, please put an end to this cruelty, and bring some of this beautiful stuff to the thirsty hordes of Australian peat lovers! I promise we'll love you for it. I know I will.

Cheers!
Posted by Peated Perfection at 19:09