As much as I love their whisky, I'm not a particularly big fan of Springbank's packaging. Aside from using the coolest 'S' in the business as their logo, the rest of the design & presentation is usually a little lacking compared to their more flashy rivals. But then that's also part of their charm! That all changed with the Rundlets & Kilderkins series though, and this one might just be the prettiest Springbank bottle yet! Of course, packaging & presentation doesn't appear anywhere on the list of requirements for making good whisky, but it doesn't hurt. And with the beautiful gleaming metal badge/label on these Rundlets & Kilderkins (R&K for short) bottlings, I can overlook those flimsy open-faced outer boxes! It also helps that they're cask strength bottlings of Springbank's whisky, of course...

So let's answer the obvious question: just what the hell are "rundlets" and "kilderkins"? They're small casks! While the 125-litre quarter casks are generally the smallest casks used by most large whisky distilleries, these are considerably smaller. According to a couple of sources, a rundlet (traditionally used to mature wine) is around 68-litres in capacity, while a kilderkin (mostly used to mature beer) is around 82-litres in capacity. So they're both significantly smaller than your average 200-litre ex-bourbon cask, which means they're giving much more cask and wood influence to the maturing spirit than the full-sized versions would in the same period of time. The rundlet & kilderkin casks used by Springbank in these releases were re-coopered down from full-sized casks, but I can't find any concrete information about those cask's previous contents.

There were three releases in the 'Rundlets & Kilderkins' series, all bottled at cask strength. The lightly peated and 2.5-times distilled Springbank release was the first, bottled in early 2012 at just over 10 years of age and limited to 9,000 bottles, which is now impossible to find outside of auctions (at exorbitant prices). And it's reported to be excellent. Next came the heavily peated and double-distilled Longrow release that I'm reviewing today, bottled in early 2013 at just over 11 years of age, and again limited to 9,000 bottles. It's now also very difficult to find outside of those aforementioned auctions. The third release, which as you can probably guess was under the un-peated and triple-distilled Hazelburn banner, was released in 2014 at just over 10 years of age, and was limited to 12,000 bottles. That one is a little easier to find, at least in Australia, probably because of the larger release, and the smaller following that Hazelburn commands compared to its stable-mates.

While they're all relatively young whiskies, they do punch well above their weight thanks to the increased wood contact from those smaller casks. Looking at Laphroaig's quarter cask bottling for example, which is only finished in the 125-litre casks for around seven months, that whisky has a totally different character to the standard 10-year old, with more sweetness, vanilla and oaky flavours all coming from that short finishing in the smaller casks, so full-term maturation in casks that are smaller again will make a massive difference to the finished whisky. The Longrow that I'm reviewing here was bottled at a cask strength of 51.7% at the end of those 11 years, and like all single malts from Springbank, is naturally coloured and non-chill filtered. Let's get stuck in! 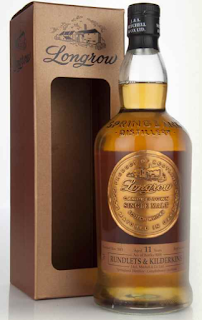 Texture: Medium weight, farmyard-funky & spicy. A little heat as well, but not unpleasant at all.

Taste: A big whack of earthy, dirty peat, much more prominent here than it was on the nose. Subsides to a big handful of wood spices and peppery oak, then some more sweet grape and more of that grassy farmyard note. A little chocolate as well.

Finish: Medium length. Still peaty & spicy, cinnamon & nutmeg especially, and there's still plenty of that grassy farmyard note. More of that salted natural licorice from the nose, but it's more prominent here. Stewed stone fruits with a spiced toffee sauce, then wood smoke comes along to wrap things up.

Notes: A lovely whisky, although it's quite the spice bomb! It reminds me a little of Ardbeg Kelpie committee release in that way actually, but not as confronting. Loving that strong licorice note in this Longrow, plus that dirty, earthy, musty peat and the sweet grape, all mixed in with the Campbeltown farmyards. The small casks have definitely done their job here, but they've also left behind a big whack of spice that I don't recall getting in a Springbank or Longrow before. I certainly don't remember encountering it in the Hazelburn Rundlets & Kilderkins, but that's to be expected since they're completely different whiskies. I'd love to know what type of casks they re-coopered into the smaller rundlet & kilderkin casks for this one, since I'm not entirely convinced they were your typical ex-bourbon casks!

Other than this one, my favourite Longrows so far are still the "Red" series. I haven't tried the Port cask or the recent Malbec versions yet, but the Cabernet and Shiraz versions were very good. And I'm not just saying that because they used Australian wine casks! While we're talking about Longrow & Campbeltown, I should give this little gem a shout out:

What we have here is a Campbeltown blended malt from Cadenhead's, the oldest independent bottler in Scotland, who are owned by J&A Mitchell, who also own Springbank and Glengyle (Kilkerran) distilleries. Cadenhead's have a shop on the Royal Mile in Edinburgh (among others), and in this amazing whisky shop you'll find a few casks up against the wall. They're separated by region, with one for each of the major Scotch whisky regions, and you can hand bottle your own blended malt, at cask strength, right there in the shop! The kicker though is the price. I (stupidly) chose a 200ml bottle thanks to a shortage of luggage space, and it cost me a ridiculously low sum of 14 pounds! For a 58.7% ABV blended malt (no grain whisky here), that reportedly contains mostly Longrow whisky. Either way, it's bloody delicious, and a serious bargain! I'll be saving some more space in my luggage for a bigger version on the next trip, because it really is that good. If you're headed to Edinburgh or Campbeltown, I highly recommend you stop in at Cadenheads and grab a bottle!

Cheers!
Posted by Peated Perfection at 17:35