Benromach distillery is quite an interesting one for me, for a number of reasons. The main one, however, is that they use more peat than most Speyside distilleries. Their locally-grown malted barley is thought to be peated to around 10-15 ppm, compared to 0-5 ppm, on average, for most other 'Speysiders' (in standard bottlings).

Benromach do also produce a heavily peated version as part of their standard range, aptly named 'Peat Smoke', which is peated to around 65-70 ppm (higher than most Islay whiskies!) depending on the batch, which I'll be reviewing at a later date, once I get my hands on a bottle.

On top of that, the distillery only uses first-fill casks for maturation, stored in traditional dunnage warehouses (lower-set buildings with dirt floors and stone walls, for better air circulation and humidity control), they employ slow fermentation and distillation, and use little-to-no technology during production. Interestingly, Benromach distillery is owned by Gordon & MacPhail, one of the largest and oldest independent bottlers in Scotch whisky.

Benromach 10 year old is their standard bottling, matured in 80% ex-bourbon casks and 20% ex-sherry casks for 9 years, before a final year-long 'marriage' in an Oloroso sherry cask. And remember they're all first-fill casks, and that wouldn't come cheap! They recently released a 57% / 100 proof version of the 10yo, while keeping the age statement, and skipping the (already light) chill filtration altogether. Other distilleries please take note! Usually when a distillery releases a higher-strength or cask-strength version of their whisky, it is either bottled at a younger age, or it loses it's age statement altogether. Kudos to Benromach for not following that trend! 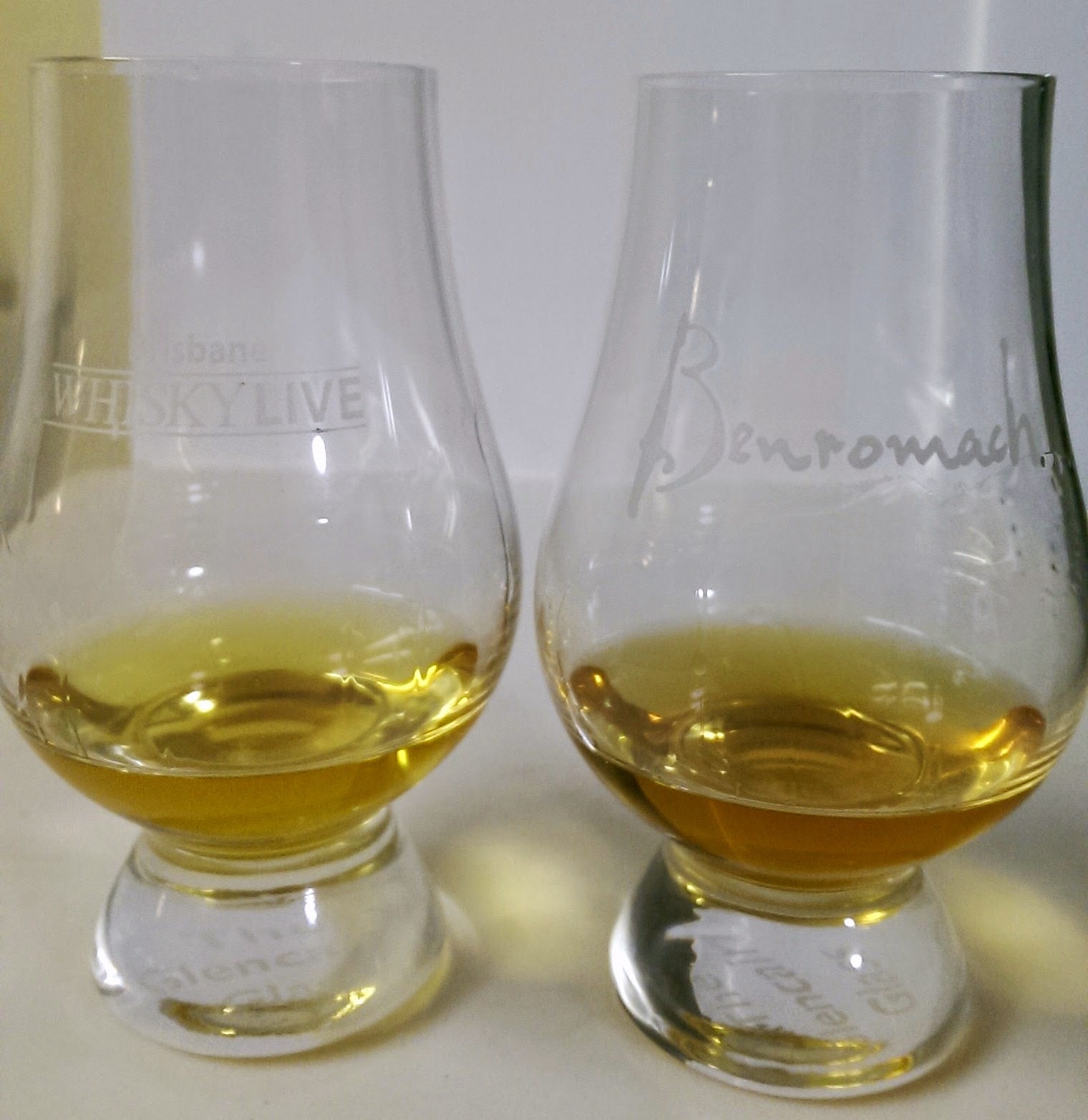 I recently received a sample of the new 57% version of the 10yo, and the standard 43% version, generously sent by Benromach's Australian distributor, Alba Whisky ('Alba' is Gaelic for 'Scotland' or 'Scottish', FYI). Aside from the chance to taste this new, even-more 'craft-oriented' expression of Benromach 10yo, it also give me the rare opportunity to taste this whisky at two different strengths, with all other factors being equal, back-to-back. Excellent! See above for the two contenders. 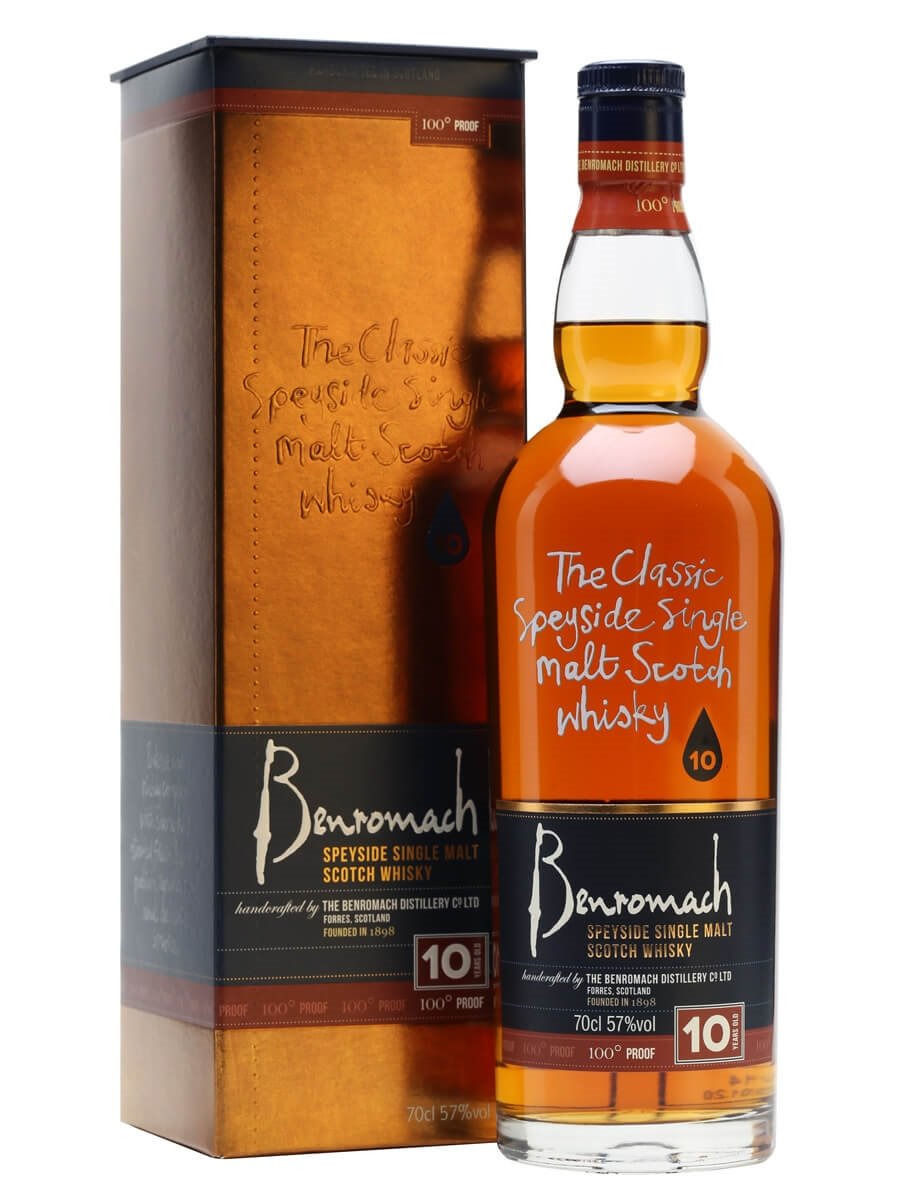 Taste: Lovely big malt and oak, savoury honey and dark toffee. Dry, fruity Oloroso sherry, and a light dab of herbal peat and light smoke. A little initial peppery-heat, but it's nothing for the strength. Very drinkable for 57%, there's no roughness here whatsoever.

And now for the little brother. 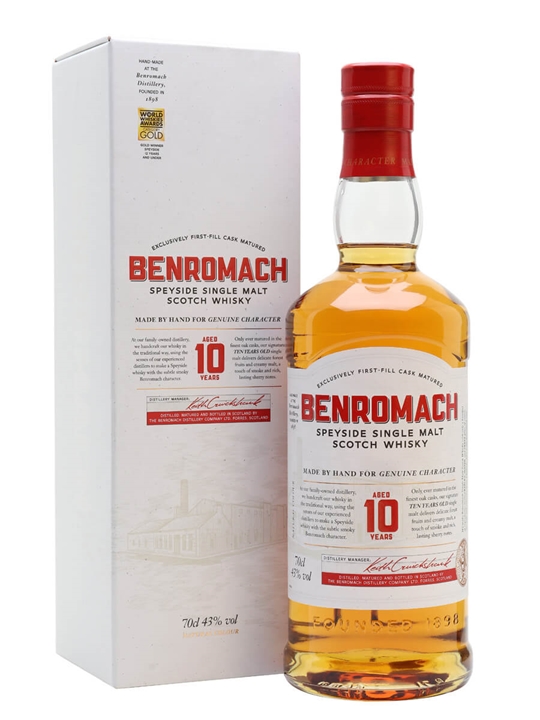 Taste: Lightly toasted cereals, slightly earthy, thanks to that light smoke being more upfront here than in the 100 proof. Less oak and spice, more honey, and sweeter honey. Harder to find the sherry influence here, a slightly more 'summery' whisky, with no alcohol or peppery-heat to speak of.

Finish: Obviously a shorter finish, but still with some lovely sweeter, malty cereal, then drying while that gentle smoke comes back for a last goodbye.

Results: The new 57% / 100 proof version of the 10yo definitely wins it for me. Yes, I gave both whiskies the same score, because it is a close race, and these whiskies are essentially two different styles. The 43% expression is lighter and sweeter, with more tropical fruit, while the 57% expression is darker and heavier, with more toasted malt, oak and spice. I do prefer the latter, that texture / mouth-feel is fantastic, and it steals the show for me.

Both of these whiskies are excellent and of unquestionable quality, nothing has been rushed, pushed through or 'close enough', and this shows in the finished product. I'm also impressed with Benromach's new packaging, the older design was a little too subtle, I think, while the new style is more distinctive.

Both of these are definitely worth trying and buying. Ideally grab one of each, to suit your mood come drinking time! I've found Benromach 10yo 57% online at Oak Barrel in Sydney, but it's sure to be in more stores soon. If you can't find it in your local, ask them to contact Alba Whisky and order it in. The standard 43% version is more easily found, Dan Murphy's have it, but it's considerably cheaper at Nippy Sweetie, albeit in the older packaging, judging by their website. I'd also recommend keeping an eye out for Benromach 'Peat Smoke', for a heavily peated expression.

On a side note, Ralfy Mitchell, master of YouTube whisky reviews, awarded Benromach 10yo 43% his whisky of the year for 2014, and his only major complaint was that it wasn't bottled at a higher strength. I hope he gets his hands on the new 57% version, because Benromach has definitely met that demand!

Cheers.
Posted by Peated Perfection at 22:17