When a particular whisky is discontinued, for whatever reason, there is often a rush to grab all the remaining stock before it's gone forever. Whether they be genuinely concerned enthusiasts, or speculating investors, these folks are determined to get their hands on the next 'hard to find' whisky while they can.

One of the more well-known of these discontinued whiskies, in recent years, would have to be Laphroaig 15 year old. It was discontinued around 2010 after a 30 year career, and was kind-of replaced by the (very good) 18 year old bottling. But they are rather different malts, and the 15 was very widely loved.

So the 15 became very hard to find, and therefore very expensive. Asking prices of over $400 were common, putting it out of reach of most buyers who would actually be drinking the stuff. The speculating investors were doing their best Monty Burns impressions.

Now, in 2015, Laphroaig distillery is turning 200 years old, as is Ardbeg, having both officially opened in 1815. There is much anticipation and speculation as to how these two brilliant distilleries are going to celebrate this huge milestone, but we have one of these mysteries solved right here. Laphroaig is bringing back the 15 year old! Made in the same way as the original, where particular casks of whisky with particular qualities are hand-picked to become 15 year old Laphroaig.

Unfortunately though, it's here for a good time, not a long time. It's only a limited release. There was an initial 'drop' of 2,500 bottles, made available to Friends of Laphroaig, earlier this year, which is, of course, long gone. All is not lost, however, as there is also a public release of around 70,000 bottles, some of which is due to hit Australian shores in June this year. A fitting celebration for the distilleries 200th anniversary, and probably a bit disappointing for those investors. Oh well!

I've been lucky enough to receive a sample of this new/old expression of Laphroaig, and am lucky enough to be the first in Australia to review it. I've not had the opportunity to taste the original version, so rather than getting bogged down in whether it's the same or not, I'm instead coming into this as a 15 year old virgin. Wait, that doesn't sound right... 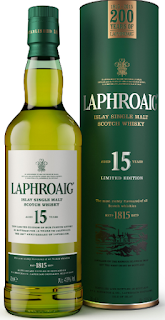 Taste: Peat and rich smoke, but herbal peat rather than medicinal. Sea salt and pepper, and hints of tobacco. Something sour and slightly bitter, dried grapefruit, tamarind? Not as sweet as the nose, more dry and slightly bitter.

Finish: Soft and light, but also quite long. Salted caramel and butter. Light peat and smoke clinging to life, and holding on for quite some time. Becomes more dry and mouth watering towards the end.

Notes: Fits quite well in between the 10 year old and 18 year old, which makes sense! Not as medicinal and confronting (to the novice) as the 10yo, which I think is the idea. Indeed it is marketed as more refined and more mellow, as was the original version, and I would say this is very accurate. It is softer and more refined, less sweet and more dry, more approachable. But still with enough delicious peat, smoke and salt to stamp it as Laphroaig. Which is just how we like it!

The 18yo by the way is soon to be 'phased out' by 2016. The 15, on the other hand, is apparently going to become the annual Friends of Laphroaig release, instead of the current Cairdeas (Gaelic for friendship) bottlings for Feis Ile, the annual Islay festival.

You may have picked up on the 18yo being phased out, and the 15yo being a limited release. And you may be worried about what that leaves on the shelves. Don't panic though, while these two expressions may be on their way out, there are more on the way. Laphroaig are not sitting on their hands, by any means. It's looking to be a busy year for them!

Speaking of which, a big thanks to Dan, and Laphroaig, for this sample, taken from the first bottle in the country. It's an honour to be tasting this whisky before release, and it's sure to be a hit. Get it while you can!

Cheers!
Posted by Peated Perfection at 22:44