Bruichladdich distillery have never been afraid of experimentation. Their Octomore range has been around for some time now, and has been, and still is, a testament to their whisky mastery, and the brilliance of their head distiller, Jim McEwan. 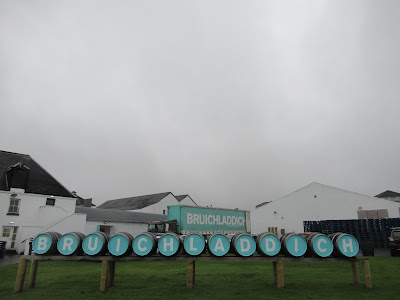 Bottled at 5 years of age (with one exception), at high strength, and distilled from super-heavily peated malted barley, they are not for the faint-of-heart, or inexperienced-of-peat. But on the same hand, they are not as monstrous or one-sided as you might expect, given all of those high numbers and young age. They are big Islay peat monsters, but they'll only maim you slightly, rather than murder you. Will this version toe the line?

I've had the privilege of tasting (and owning) a few different Octomore releases over the last few years (4.2, 5.1, and 6.1), and they've all been very good . I've also tasted the 10 year old, but found it a little disappointing. This 6.3 release, that I can't stop looking at across the room (I swear it winked at me), this is the king of kings. To quote Bruichladdich themselves, this is the 'Octomore of Octomore'.

This particular Octomore 6.3 'Islay barley' release is very special. It was distilled exclusively from barley grown on Islay (duh), at James Brown's farm, named Octomore (once home to a small distillery), in the field named 'Lorgba'. The barley was then sent to Baird's Maltings in Inverness, where it was peated to an unbelievable 258 ppm phenols! This is the most heavily peated whisky in the world. By a huge margin. The previous ppm title holder was the 5.1 release, which was peated to 169 ppm phenols. So the 6.3 has well and truly smashed the ppm record. Will it ever be repeated? Time will tell. There has been another release since, the 7.2 version, which was distilled from barley peated to 208ppm. Still a huge number, and much higher than anything else that I know of, but it's not quite 258, is it? We know that ppm measurements aren't always a definitive indicator of what you will get in the finished product, but it's still very impressive.

Anyway, this super-heavily-peated malted barley was then sent back to Bruichladdich, where it was distilled in 2009 and aged in ex-bourbon barrels for 5 years, then finally bottled at a huge 64% in 2014. As with all Bruichladdich whisky, it's non-chill filtered and bottled without added colouring. Excellent.

To my knowledge, this is the first and only review of Octomore 6.3 in Australia, and I am looking at one of only eleven full bottles sold in the country, and we have one man / business to thank for that. The 6.3 was actually released late in 2014, and I was extremely excited about it, thanks to social media. But, Bruichladdich's Australian distributor, SouthTrade, were either unwilling or unable to get it. I enquired after it's availability myself three times, and while they did reply, it was not good news. **See update at bottom of page!**

Bruichladdich, to their credit, will ship to Australia direct, but through no fault of theirs the shipping costs are huge, not to mention the duty and taxes payable at customs on arrival. That unfortunately was not a viable solution.

Enter Craig from Nippy Sweetie Whiskies, the local hero who somehow managed to procure a case of this magnificent malt, and import it himself for sale. And rightly so, because within a few hours of a single facebook post (not even posted on his website), eleven bottles were spoken for (including mine), and the twelfth was being split into samples for individual sale. Nippy Sweetie Whiskies are really coming on strong, regularly adding new, rare, hard to find and ultra-desirable whiskies to their range. Great stuff.

Due to the aforementioned shipping and duty costs (higher than usual due to the high strength), this bottle did not come cheap. In fact it is the most expensive single bottle of whisky I've ever purchased, albeit not by much. But, there will never be a a lot of this whisky in Australia, and I believe it is out of production, or will be shortly. So I jumped at the chance to own a bottle. And it is a beautiful bottle... 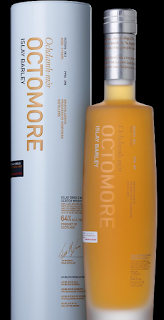 Nose: Mega-peaty of course, but it's a stunning complex peat. A sweet and slightly sour, very slightly medicinal peat. Coastal sea spray, beautiful sweet golden barley. Some rubber & soap, sour milk (in a good way though, trust me), hints of toasted nuts. Not a lot of smoke, but that peat is just amazing. If that was the only thing I got on the nose, I would be satisfied.

Texture: Mega thick, oily and creamy. Looking at the glass after a little swirl, the legs have become part of the glass. Nothing is moving at all. It's like the earth has stopped turning. The anticipation builds...

Taste: Wow. Just wow. It's a challenge to put this experience into words, but I'll try. That massive, complex peat is there, but so is the sweet malted barley, salted caramel, brine, embers and thick, warm smoke from a camp fire. So balanced and creamy, I would never guess this was 64% and only 5 years old. But good god, that incredible peat. I'm giddy.

Finish: Mega-long and mega-peaty. Sweet smoke and warm wood embers. Earthy, toasted grains, some gentle drying oak, even a little buttered toast. Lasts forever! It's been at least 15 mins since my last sip and it's still dominant, it's omnipresent, and I don't think about resisting. I must have more!

Notes: This is incredible! I had thought of the 5.1 as the king of Octomore, but no, Bruichladdich are correct, this is it. 6.3 is the king. The peaty emperor. The Octomore of Octomore. And I love it.

Sure, it's expensive, but it's worth every cent, without question. Is this peated perfection? Well, nothing is absolutely perfect, but this is about as close as it gets. This 6.3 wants for nothing. Bruichladdich and Mr. McEwan may have a difficult task ahead trying to improve on this.

If you're in Oz, I strongly suggest you head over to Nippy Sweetie ASAP and order a bottle, or at least get a sample (while stocks last of course). I don't know how many bottles Craig will be able to get, but I'm going to start saving now, and I really hope there's still one left for me when the time comes. One bottle is just not enough, I must have more!

A huge thanks must go to Craig from Nippy Sweetie for having the initiative to get this baby in, outstanding stuff.

If you're not in Australia, do your utmost to find a bottle or sample of Octomore 6.3. If you're a peat head or an Octomore fan, you won't want to miss this one.