Awards have an undeniable effect on the whisky world. These days, the results of the major whisky awards make international news, as well as flooding social media and forums. Famous whisky critic Jim Murray's last 'whisky of the year' award went to Yamazaki Sherry Cask from Japan, and the world's media instantly took this to mean that Scotch whisky had lost it's edge and was in trouble.

Obviously that's not true, but the award and media attention had a massive effect on the pricing and availability of not only the Yamazaki Sherry Cask, but all Japanese whisky in general. To the point where it is difficult to find, and very expensive to buy, in it's native country, where spirits are generally quite cheap.

It's important to remember that this award is one person's opinion, albeit a very experienced one. I'm sure it's good whisky, I can't say I've tasted it, but it's not going to be the best in the world for everyone's tastes and preferences. Besides, Japanese whisky has long been a worthy rival to Scotch, this isn't really anything new. Other awards are judged by a panel of experts or industry personalities, which gives a more balanced result, but this still does not guarantee you'll agree with their opinion. So while an award may indicate a  good whisky, or one to look out for, take the results with a grain of salt.

Nonetheless, whiskies from other parts of the globe, commonly known as 'world whisky', are certainly gaining traction and recognition amongst whisky folk. But if you had asked a whisky enthusiast to name their favourite world whisky only a few months ago, chances are very few would have named Taiwanese Kavalan whisky as the winner. And yet, after their Kavalan 'Solist Vinho Barrique' single cask, single malt won 'World's best single malt whisky' at the World Whiskies Awards, Kavalan (meaning 'flat-land people') has been thrust into the limelight, and is becoming more widely sought after.

The Kavalan 'Solist' series are all NAS, cask strength, single cask, single malt whiskies. Obviously this means there are batch variations, most easily identified by the cask number and different alcoholic strength. The sample I'm reviewing today (purchased here) is a slightly older release, being 56.1% ABV rather than the apparent 58.4% of the recently awarded release, although it's difficult to confirm which batch / cask was actually awarded.

The name 'Vinho Barrique' refers to a wine 'barrique' cask, with a capacity of 225 litres (for reference, a typical American bourbon cask is 195 litres in capacity). The casks were used to mature both white and red wine, before being internally shaved, toasted, charred, and filled with whisky. There is no age statement, but Kavalan whiskies are thought to be matured for around two years prior to bottling, which is very young, although we need to consider the climate factor, Taiwan gets some very high temperatures and humidity.

Enough of all that, let's drink some Taiwanese whisky! 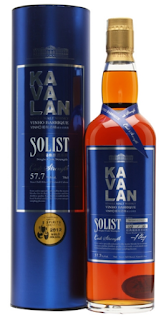 Nose: OK, colour me impressed! Super sweet, jammy and thick. Sweet, fruity wine. Oak tannins, and a little wooden spice and pepper. A lot of intensity, and yet quite balanced. Reminds me of a dessert wine or fruit liqueur which has been hitting the gym. Extra fruit, oak and spice. Becomes less sweet with time in the glass, taking on a little sourness.

Texture: Syrupy, but also quite clean.

Taste: Quite hot and a little harsh, but plenty of syrupy sweetness and a lot of oak- tannins and wood spice. Mixed fruit conserve. Reminiscent of Bruichladdich's Black Art 3, with a little extra heat and tannins, but slightly rough around the edges. Note that the Black Art is 23 years old, and the Kavalan is 2-3 years old, so that's really a compliment!

Finish: Dried fruits now, becoming much less sweet, heading towards bitterness, but still jammy. Not a long one though, short-to-medium in fact.

Notes: The nose on this is incredible, and the taste is enjoyable, but the finish and slight harshness kills it slightly. A very interesting whisky though, very impressive for it's age, and definitely one to try. And from such a young distillery, this is one to watch.

I'm looking forward to trying the sherry cask Solist release soon, and the fino release is highly regarded as well. Nippy Sweetie Whiskies are doing a taster pack containing all the notable Kavalan whiskies, at a very reasonable price. With prices creeping up on the full bottles, that's a good way to go if you're curious.

On another note, my next review will mark the 1 year anniversary of Peated Perfection! It's come quite a long way already, and I have a fitting review lined up to mark the occasion. Until then...

Cheers!
Posted by Peated Perfection at 22:34