Yes, Tasmanian Whisky. A separate entity to Australian whisky, both geographically, and by reputation. Tasmanian Whisky is world renowned, with many distilleries winning big awards, and consistently gaining traction on the world stage. I can't deny that this building momentum, and my curiosity, helped to decide the destination for this year's holiday. OK, the cheap flights and amazing scenery may have helped as well. But the whisky was the main thing! 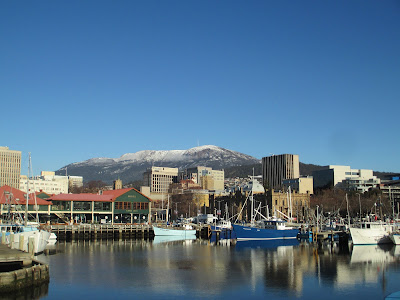 The state of Tasmania is a relatively small island off the South-Eastern coast of Australia, and is home to just over 500,000 people. It's also very scenic and very beautiful, both naturally and architecturally, and has a different cultural personality to it's bigger siblings on the mainland. The island itself has a very rich history, but rest assured, this is still a whisky blog: the island is currently home to six active malt whisky distilleries (and one rye distillery), and there are more on the way!

Tasmanian whisky, in the modern, and legal, sense, was born in 1992, after extensive political work and much cutting of red-tape, spearheaded by the grandfather of  'Tassie' whisky, Mr. Bill Lark. He realised that Tasmania's climate and conditions were ideal for making whisky, and set out to prove it. His was actually the first distillery licensed to make whisky on the island for over 150 years, after the island's governor outlawed distilling in the 1830's. These days though, the future of Tasmanian whisky is looking very bright.

While I couldn't visit all of the Tasmanian whisky distilleries on the trip, for fear of mutiny by my travelling companions, I did manage four of them, plus one independent bottler. I'll be giving a basic profile of each company, and reviewing one of their whiskies, in each part of what I've just decided to call my 'Tasmanian whisky adventure'.

So why an independent bottler, you may ask? Well, because I don't believe in saving the best 'til last! I can comfortably say these guy's are producing the best Australian / Tasmanian whiskies I've tasted to date, and they're right up there by world standards. So, for part 1 of my Tasmanian adventure, let's take a look at Heartwood Malt Whisky! 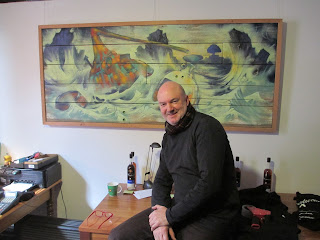 On a cold wintry Tuesday morning, my wife & I were lucky enough to meet Heartwood's proprietor, Mr. Tim Duckett, pictured above, at his office in Hobart, to taste some of his fantastic whisky. Tim has been involved in the Tasmanian whisky scene from the beginning, and began collecting casks in 1999, primarily from Lark distillery, and from Tasmania distillery (Sullivan's Cove), with the first Heartwood bottling being released in 2012.

These days he has access to whisky from six different distilleries, and has over 7,000 litres of whisky maturing in his bond store, including some of the oldest maturing whisky in the state, and probably the entire country (>15yrs old). His methods are a little different to the norm, but that's exactly how he likes it. Heartwood try to have every bottling released be totally different to the last, a feat which many independent bottlers can't manage, or can't be bothered with.

Tim doesn't believe in closely analysing a whisky in a darkened room, rather he believes a whisky is to be enjoyed with good company, and is all about the experience you have with that whisky. He's all about making good whisky, and is making whisky that he likes, without trying to please everyone else, or make mountains of money. Luckily though, he does seem to have excellent taste! 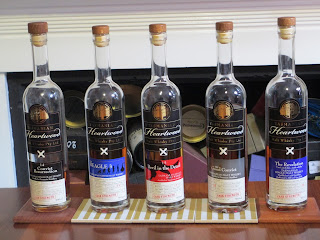 Heartwood doesn't take itself too seriously, but they are hell-bent on getting top quality and big flavour (dinosaur big!) from their malts. Tim aims for what he's calling a 'Brontosaurus' flavour profile, with a thin neck, building to a massive body, followed by a long, thinning tail. He also aims to use mostly Australian or Tasmanian casks to get these flavours, mostly using Australian ex-port, ex-sherry and ex-wine casks, so you're getting a very Australian product in these bottles.

If a whisky isn't at the level Tim wants it to be, it can expect to be beaten and yelled at, and even held back, until it shapes up. In the past, Tim has held back a bottling, despite the entire release being pre-sold, because he wasn't entirely happy with it! In fact a recently released Heartwood, named 'The Revelation' (a tribute to Bill & Lyn Lark), was destined to be the first 10yo age-stated bottling of Lark whisky, but it wasn't up to Tim's standards, so rather than bottle and sell it anyway, he added some 7yo peated Lark whisky to the mix, to get it to the level he wanted. I can personally attest that this change of heart (get it?) created a truly excellent whisky, and in fact I couldn't go home without a bottle! The final product is also decanted or 'married' before bottling, and can even be left in the sun (!) to get rid of the volatile and undesirable compounds, before bottling.

Testament to their tongue-in-cheek, 'devil may care' outlook (that's one for the Heartwood fans), are the names of Heartwood's whiskies, and the labels he sticks on his bottles. Expect to see things like '50%-ish', 'could have been a 14 year old' and 'can't catch fish-make whisky', on bottling's named 'release the beast', 'velvet hammer', and 'vat out of hell'. In fact, that last one was the first vatting (a blend of different single malts) of Tasmanian malt whiskies, and was released just as the Scotch Whisky Association had banned the use of the term 'vatted malt' in Scotch, and was subsequently shipped to Scotland, labelled as just that!

Tim's whiskies are all bottled at cask strength, without chill filtration or added colouring, and are some of the strongest you can buy. The highest strength bottling so far, named 'Devil in the detail', was bottled at a whopping 73.5%. But with all Heartwood bottling's, there are no rough edges, no harshness or excessive alcohol heat (reinforced by the fact that we were able to drink it at 10am on a Tuesday morning!), they're just big, bold, boisterous whiskies with loads of flavour, and surprising complexity. Enough talk though, let's drink some whisky! 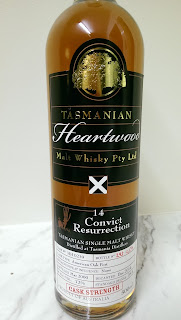 Notes: So good. Or all good, as Tim would say. One of my all-time favourite un-peated whiskies, in fact. Such a huge body and such massive flavours, but it's still approachable and drinkable, even at that massive natural strength. The Tasmanian / Sullivan's Cove DNA is still there, but it's been turned up to 11 or 12, and it's taken on it's own character. I do wish it came in 700ml bottles though, mainly so I'd have more of it left!

Speaking of which, even in the smaller bottles (which we're going to be seeing more of in the future), I think these Heartwood's are just about the best value Australian whisky you can buy. They're not exactly cheap (think $220-260), but you're getting considerably older malt than most for those dollars, and without the faster maturation in smaller casks, and at a much higher strength. As Heartwood's branded t-shirts accurately & proudly state, you're getting 'more bam per dram' with these guys.

Tim & his team are doing brilliant work, and long may it continue. There are many new bottling's in the pipeline, the next one of which should be very interesting, because it's 100% peated whisky, and that's 100% Tasmanian peat. I don't think this has ever been done before, and I think it's going to be a cracker. Tasmanian peat is of a lighter, sweeter, more floral style than some may expect, but it'll still be very interesting. I can't wait to try it, so hopefully I'll get my hands on a bottle before they're all gone! There's also a release coming in the future, which will again be all-peated whisky, but matured in Australian muscat (sweet wine) casks, to be aptly named 'The smoking gun'! Can't wait for that one, either.

I'd highly recommend trying these if you're into big, flavoursome whiskies, or you're after something a little different, and for 'more pleasure per measure'! There are a few bottles of the current range still around, and there are more releases on the way, so keep an eye on Heartwood's own site, and also at Nippy Sweetie Whiskies, who also has 30ml sample bottles available. Get 'em while you can...

Cheers!
Posted by Peated Perfection at 22:08