My first Bowmore review, and something tells me this might be a good one!

Bowmore distillery is the oldest distillery on Islay, having been officially founded in 1779, in it's namesake capital town. The distillery sits across the water from Bruichladdich on the shores of Loch Indaal, which opens to the Atlantic ocean. They've actually managed to keep hold of some of the original methods in the production process. They use Scottish barley, a portion of which is floor malted at the distillery and dried using (powdered) local peat, to a level of around 25 ppm on the malt. But their three-level malting barn cannot keep up with the distillery's production requirements, so the remainder is sourced from elsewhere, mostly from the mainland of Scotland. This results in a relatively light-medium peated whisky, especially when compared with it's Southern-Islay counterparts.

Which is partly why Bowmore is often low down on my list of preferred Islay whiskies, along with the fact that I have not been particularly impressed with their entry-level offerings (the legend, small batch, and 12 yo, and also 18 yo expressions). I suspect this is largely thanks to the low bottling strength and chill filtration, although the flavours haven't blown me away either. But there have been a few bottling's which bucked this trend and that have amassed a huge following, and huge collector-level prices, on their own merits. There seems to be a simple recipe to these cult-status bottling's, mainly that they're bottled at cask strength, carry an age statement, and are matured on-site in the distillery's 'No. 1 vaults' dunnage warehouse, which is the last remaining 18th century original building, and supposedly the oldest in Scotland. The majority of Bowmore's whisky is matured off-site on the mainland, so the casks matured at the distillery are more authentic and certainly more desirable.

One of these special expressions is the Devils Casks series, which is supposedly named in reference to a local legend about the Devil escaping Islay in a cask of Bowmore. More importantly though, they've all been matured in first-fill sherry casks, bottled at cask strength, and without chill filtration. The first two batches were reasonably priced at the time of release, and were both 10 years old. The first is now very collectible and very expensive, with the second release slowly catching up. The recent third and final release of the series is expensive to begin with (more than twice the price of 2014's batch 2), and unfortunately has lost the age statement from the previous versions.

The sample I'm reviewing (thanks to a swap) is from the 2014 second release, which was bottled at 56.3%. I was also lucky enough to grab a bottle recently when a big Australian retailer unexpectedly found a few bottles somewhere, and they subsequently sold out within days. But should I have bought two? 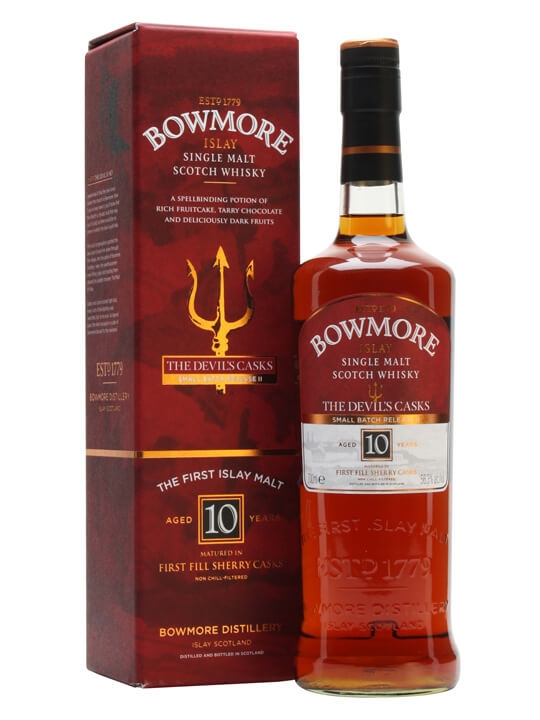 Colour: Very dark bronze. Darker than it looks in the photo above.

Texture: Medium. Richly flavoured, a little heat, but in a good way.

Notes: Very nice. A little different to the norm for me, but in a good way. Very enjoyable, and certainly my favourite Bowmore so far, by a huge margin. But that's to be expected, thanks to it being bottled at cask strength and without chill filtration. Great stuff, and a bargain at the original price. So yes, I definitely should have bought two!

It's a shame the distillery released such a small amount of the first two batches, and that they priced the third (NAS) batch so much higher. I could understand if it was a little higher, but at over double the price only one year later, it's a little much. But, I haven't tried the latest batch, so I shouldn't pass judgement just yet. Having said that, I don't see how batch one could be worth the sort of money it's going for at auction. It's now strictly in collector territory, unfortunately.

This one makes me want to try Bowmore Tempest as well, which is also 10 year old and cask strength, but it's been matured in first-fill bourbon casks instead of the sherry of the Devils Casks series. It's much less hard to find, and much less popular with the collectors, which helps keep the pricing down. Certainly one to keep an eye out for, I think.

But then there's no denying the appeal of ex-sherry cask whisky, especially when there's a little peat involved. Delicious stuff.

Cheers!
Posted by Peated Perfection at 18:37