As soon as you step outside of Ardbeg's releases, and to a lesser extent also Laphroaig's, Feis Ile bottlings are not easy to come by. This is in fact my first Feis Ile Kilchoman, so this one is very exciting! 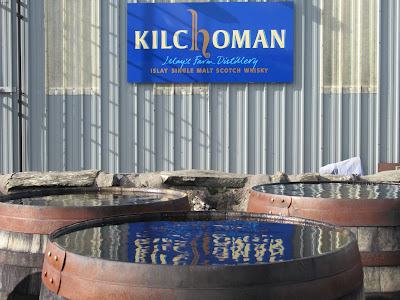 Feis Ile (pronounced "faysh eela") is the Islay festival of music & malt, which occurs around May/June each year. All of the Islay distilleries have their own 'open day' during the festival, which usually involves copious amounts of whisky, music, food, and large crowds of people. But the highlight of the festival for most whisky enthusiasts are the special bottlings that each distillery releases specifically for the festival. Aside from the aforementioned Ardbeg and Laphroaig releases, these bottlings can only be purchased from the relevant distillery shop during the festival, and/or until sold out. Well, until you visit the usual auction websites a few days later and come across the masses of bottle flippers that inhabit those dark corners, but that's another story. While the Bowmore, Bruichladdich and Lagavulin releases usually get a lot of collector attention and subsequently fly off the shelves very quickly, the other distilleries' efforts tend to be a little less... ostentatious.

Being the young upstart on Islay by more than 100 years (at least until Ardnahoe start distilling), Kilchoman tend to do things differently. Production began in late 2005, and their oldest whisky to date is 12-years old with most considerably younger than that, but their commitment to quality and very careful production has produced some outstanding whiskies at much younger ages. Aside from growing their own barley for use in their 100% Islay bottlings, which they also floor malt at the distillery, everything else is also done on-site, including maturation and bottling. The distillery's core range is quite diverse these days, with the entry-level Machir Bay and Sanaig bottlings, plus the annual Loch Gorm, "vintage" release and 100% Islay bottling. They also produce a large amount of single cask releases for private buyers, bottle shops, bars and importers, as well as their own distillery exclusive bottlings which tend to be exceptional. Kilchoman's Feis Ile bottlings are not always single casks, but are very small releases (usually 2-3 cask's worth), and they are always bottled at cask strength.

The 2016 Feis Ile release that we're looking at today is an 8-year old single Oloroso sherry butt (500-litre cask). It was distilled in December 2007, before being bottled in May 2016 just in time for the festival, with a yield of 634 bottles. Since bottling is carried out on-site, there's no need for Kilchoman to worry about the massive lead times at centralised bottling plants that most distilleries need to account for. If I'm not mistaken, at the time of release this 2016 Feis Ile was the oldest sherry-matured official release (not a private bottling) to date, and it was also the oldest Feis Ile bottling to date, only beaten by the 2018 Feis Ile 11-year old bottling. Cask strength in this case was 56.6%, and being a Kilchoman it is of course non-chill filtered and naturally coloured. Obviously it's not an easy whisky to find, and you'll need to look to the overseas auctions, which is where this bottle's owner found his. And I'm lucky enough to have a sample to review! 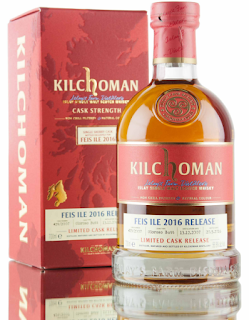 Nose: Very nice. Fresh & bright to start with, but also rich & quite deep. There's a lovely salty, medicinal tang to it like fresh sea salt & drying kelp with a touch of iodine, and a deep butter toffee sweetness. Some dank spicy oak and stewed stone fruit, dark cocoa powder and fresh black pepper.

Notes: Very nice stuff. It's a darker, danker, spicier dram than I'd usually expect from Kilchoman, even in a sherry cask, but there's still plenty of character & plenty of flavour to be found here. It is quite spicy though, not in a harsh alcohol way but more spicy oak, chilli and pepper, and there isn't a huge amount of peat to it either. But that's not a bad thing, there's still plenty to enjoy in this whisky. Just don't go into this expecting a higher strength version of Loch Gorm, it's quite different in style. Which is the beauty of single cask whiskies after all, and is also what Feis Ile bottlings should aim for if you ask me. If you somehow manage to stumble across a bottle of this one, it's well worth a buy or at least a try.

Another very tasty young whisky from Kilchoman, that is a different take on their usual style. Is there anything they can't do? Well, no, of course there isn't!