A review of a special whisky to mark a special occasion. And it's cask strength Laphroaig, so you know it's tasty! 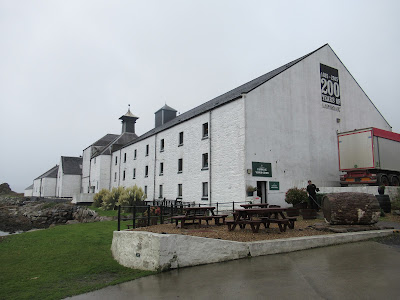 I've been a huge fan of Laphroaig's 10 Year Old Cask Strength expression since I first encountered it, quite a few years ago now. I've since managed to taste most of the different batches now, and have reviewed a few of those as well (Batches 6 & 9 here, and Batches 8 & 10 here). To date, the brilliant Batch 006 & 007 bottlings are my picks of the more recent releases, but Batch 001 and the un-numbered / pre-batch number "red stripe" bottlings from the mid-2000s were also exceptional. The distillery is now up to Batch 011, which was bottled in March 2019. Batch 11 has seen a slight change to the packaging, with the return of the "green stripe" on the front label & outer tin, something that was last seen in the early 2000s. It's only a subtle change, but it's something exciting for Laphroaig fans, and it's a subtle nod to the end of a chapter, and the start of a new one. Which is rather fitting, because this review is dedicated to Laphroaig's national brand ambassador to Australia, Dan Woolley. No, don't worry, he's not dead, but he is moving on since his role has been made redundant. In fact he officially gave up the reigns as of Friday the 13th (slightly ominous!), so I thought it was a fitting occasion to review a special Laphroaig and give him a nod for the outstanding job he's done over the last five years as the national whisky ambassador for Beam Suntory's brands in Australia. But all is not lost, because he's opening his own malt whisky distillery, and will be launching his own Australian single malt whiskies in early 2020! Which is very exciting, because I have no doubt that he's going to kick some serious posterior with some seriously tasty (and reasonably priced) whisky. I've tasted a couple of pre-release teasers to date, and some new make spirit, and believe me when I say that this is definitely one to watch. Break a leg mate!

Back to the review at hand. I'm sure there are a few readers sitting there in their pyjamas thinking "Oh, it's just Laphroaig 10 at a higher strength, it's not that special". Well, wash your mouths out, because if you're yet to taste one of these scarce "10CS" releases, you really don't know what you're missing. If you'll excuse the pun, these bottlings are essence of Laphroaig in a bottle, with the volume (of flavour) turned up to 11! There are probably also some American readers sitting there looking at their 750ml bottles thinking "Oh, it's only a Laphroaig 10 Cask Strength, that's not that special". Well, you're spoiled rotten, because the whisky that you can purchase at your local specialist bottle shops (sorry, liquor stores) for some ridiculously low prices (generally under $80 USD!) is all but unobtainable down here in Australia. The only safe way to get this beloved elixir in Australia is to buy it directly from the distillery shop, or from another overseas retailer like Master of Malt or The Whisky Exchange. All of these options then incur high shipping costs, and ridiculous amounts of duty, excise and GST (our version of VAT or sales tax), plus an extra handling fee from DHL. The combined result is a single bottle of this whisky landing at around $220 AUD, which is a serious jump from the original distillery price of around $120 AUD. Unfortunately both this magnificent liquid, and since 2014 also the annual Cairdeas releases, are not bestowed on Australian Laphroaig fans by the official importer. I've already done my fair share of whingeing on this subject, such as in those two previous reviews linked above, so I'll leave it at that for now. But it would certainly be nice if they'd do us a favour and change that!

After privately importing both this bottle of Batch 011 of the "10CS" and a bottle of the 2019 Cairdeas (reviewed here) direct from the distillery shop, and hearing of Dan's news, I decided to crack it open. And on my own birthday a few weeks ago, no less. Well, when I say direct from the distillery shop it actually went via Germany, after the Beam Suntory higher-ups have seemingly appointed a new distributor for their web orders. To cut a long story short it was a bit of a mess, with some serious teething issues, because most buyers waited at least one or two months AFTER payment before they finally received their order, with very little communication from said distributor in that time. Regardless, it arrived eventually, and it was worth every second of the wait. Spoiler alert: it's glorious! Batch 011 was bottled in March 2019, after being matured in first-fill ex-bourbon casks for at least 10 years, at a cask strength of 58.6%. It's non-chill filtered, and ostensibly naturally coloured, and as per usual there is no information on the number of bottles. But with the exception of those spoiled Americans mentioned above, you can't expect stock to last very long at all. Let's get into it! 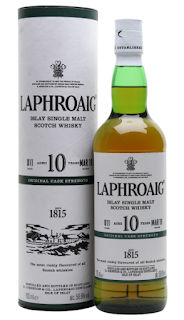 Texture: Amazing! Heavy weight, but not too heavy, oily, very rich & intense. A little chilli heat, but in a pleasant way.

Notes: Absolutely delicious. You'll have to be a fan of the heavier Islay whiskies, and of young cask strength whisky in general, but if you can tick those boxes then you're going to love this. It's an intense, concentrated dram with loads of character and masses of flavour. The nose is sweet and (low tide) coastal, the palate adds ash and spice, and the finish is hugely long with almost pure essence of Laphroaig. There is no down side to this experience, no hint of lost promises between the nose and palate. In fact it reminds me very much of Heartwood's Mr. H and his favoured dinosaur-shaped flavour-profiles, with the long thin neck building to the big fat body, going into the long tapering tail. Which of course is a spot-on description of the ideal cask strength malt whisky!

I'd have to put Batch 011 on par with 006 & 007, which are my favourites of the numbered batches to date. While each batch is distinctly different, this is right up there with the best of them - without a doubt. It was absolutely worth every second of that long wait. In fact I wouldn't hesitate to do it all again to get myself a second bottle! If you were one of the many that got a little impatient during that process, and if you've lost touch with Laphroaig or you find the standard 10-year old a little soft, do yourself a favour and get a hold a dram of this beastie. Word of warning though, if you do get a dram then you're immediately going to want a  bottle of your own!

To John Campbell, the Laphroaig Distillery, and of course Dan Woolley at the start of his new chapter: Slainte mhath, and here's to many more tasty drams from here on in!

Cheers!
Posted by Peated Perfection at 18:12