In times like these, we sometimes need the whisky-equivalent of a large serving of some naughty comfort food. Normally I'd be reaching for a cask strength Islay, but let's keep it local: Heartwood to the rescue! 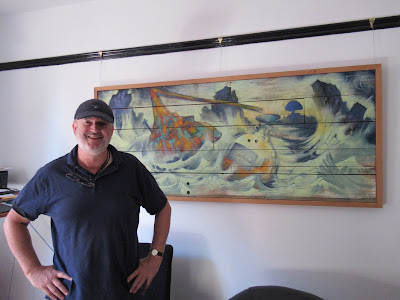 Mr. H's summer fashion line - coming soon to a retailer near you!

What we have here is what I'm calling an 'old school' Heartwood. Most of Mr. H's releases over the last couple of years have been younger bottlings at slightly lower strengths than what you might say he's famous (or infamous) for. Don't get me wrong, some of those younger bottlings have been brilliant - Mediocrity Be Damned, Shade of Night and Shot In The Dark come to mind, and they're all very good - Heartwood doesn't release whiskies that Mr. H isn't happy with, and luckily for us the man has rather high standards! This release though, Market Correction, is a bit of a throwback. What we have here is a 13.5-year old single malt from Tasmania Distillery (a.k.a Sullivan's Cove), that like many Heartwoods has been through a fairly difficult upbringing. It's technically a single cask whisky, even though there have actually been four different casks involved - but no blending/vatting/marrying has taken place. Yes, this whisky has been through four different first-fill casks, or if you'd prefer a familiar term, it's undergone three consecutive cask finishes. Starting life in an ex-port cask, it was then transferred to a muscat (sweet fortified wine) cask, then a sherry cask (Oloroso-style Apera), and then a second sherry cask (same again), all of Australian origin. Now you may be asking yourself, "why?" And the answer refers to the above mention of Mr. H having high standards, and not releasing any whisky that he isn't happy with. He will literally beat his whiskies with a stick (a paddle, in fact) or throw them in the "hot box" (a naturally warm room of his bond store / warehouse) to get them whipped into shape, but sometimes that's not enough, so he then puts them through different barrels to get the desired result. Not a particularly cost-efficient or time-efficient process as you can imagine, but that's never been a priority for Heartwood - and we're all the better for it.

Think that name, Market Correction, is a bit odd? It's a reference to Mr. H's prediction that the Tasmanian & Australian whisky industries are heading towards a marked decline in demand, and subsequently pricing. Obviously he's much more knowledgeable on the subject than myself, but I certainly agree. This is based on the fact that there are now more than thirty distilleries in Tasmania alone, which is up from nine in just the last six years, and up from zero in a little over 25 years. They're all tiny distilleries in comparison to Scotland of course, with Hellyers Road being the largest at the moment, although a couple of more recent additions have very large aspirations. There is also a huge boom in the mainland Australian distilling scene, again with a couple of larger players with very large aspirations, and it often seems like there's a weekly 'first release' bottling coming out of a new small distillery that has popped up somewhere. How many distilleries are there in Australia as a whole? It's actually getting very close to 300! Not all of those are producing whisky at this stage, in fact I'd say most are producing gin (another flooded market), but many have plans to do just that, or other dark spirits. Compare that to the 120 whisky distilleries in Scotland, where distilling whisky has been part of the culture - and a major export - for a couple of centuries and counting, and the global demand is absolutely massive. So the Australian whisky market is well & truly flooded, even in its early years, and many of those small distilleries are going to be competing for many of the same resources (particularly casks), not to mention competing for the same limited number of customers. Don't forget that there's also a rising number of independent bottlers, and even a few contract distilling operations where they produce your spirit for you, and you bottle it as your own whisky. Our whisky 'scene' is still far behind that of most western countries, and our market for single malts is positively tiny in comparison. Remember too that those distilleries are still competing with imported whisky and whiskey from around the world, often at considerably lower pricing thanks to operating costs, production volumes and a few other factors - they're all paying the same ridiculous rates of duty and excise, though, which is often misunderstood. This flooded market is likely to create Australia's own "whisky loch", which as we know from the past does not bode well for the smaller producers, or the pricing of the product in general. And that's all going to be made infinitely worse by the current situation around the world.

But I think that's enough doom & gloom for now (if not, click here for more of my thoughts on a similar subject from last year), let's get on to more positive things. In case you've gotten this far without knowing much about Heartwood, they're a tiny father & son independent bottling operation in Tasmania who are responsible for both Heartwood Tasmanian whiskies and Tasmanian Independent Bottlers (a.k.a. TIB). They've amassed a huge cult following - deservedly so - for doing things their own way, and arguably also for doing things the right way. There's no chill filtration and no added colouring to be seen, and Heartwood are well known for their brutal honesty, and excellent standards of quality. I've written quite a bit on the subject in the past, so check out this and this post for more detailed information. This particular whisky being a Heartwood means that it's been bottled at cask strength, 64.6% in this case, and as mentioned above it's technically a single cask bottling, but the same spirit has been through four different first-fill casks before it was deemed ready for release by the mad alchemist and his equally-mad apprentice. Cask number TD0053, Market Correction consisted of 280 bottles, and of course is completely sold out. You need to be very quick to get yourself a bottle of Heartwood these days, and very few bottles ever make their way out of Australia - luckily for us down under. Let's get to it!

Nose: Oily, rich & spicy. Nippy too of course - it's nearly 65% - but it's not aggressive or harsh. There's thick treacle, dusty toasted oak, and sweet, thick stewed stone fruit with a vanilla pod and a few berries thrown in. Also some bitter orange slices, star anise and cinnamon.

Notes: A massive whisky with a huge amount of flavour. Some of these Heartwoods are almost like drinking cordial concentrate without adding water - there's a lot going on, and they're quite intense, but somehow it works! Masses of flavour, a big texture and an even bigger finish. The classic Heartwood dinosaur flavour profile - long neck, big fat body, long tapering tail. Those extra casks have certainly had an effect - at times this could almost pass for a rum or a cognac, but thankfully that's a fleeting feeling. It's still very much a Heartwood malt whisky! There aren't many whiskies or other spirits that could hold up to spending time in four different first-fill casks, but Market Correction has - that must've been a monster spirit! But more likely it's down to Mr. H's skilled & vigilant (obsessive) cask management.

This is certainly a nod back to the older (in age and in bottling date) Heartwood releases, particularly with that extra cask influence. It offers a different experience to the younger, more recent bottlings. Not necessarily a better experience, mind you, but a different one. Bravo Mr. H, as usual!

A new Ardbeg named "For Discussion"? Well OK then, if you insist! An affordable, age statement Ardbeg at a decent strength is alwa... 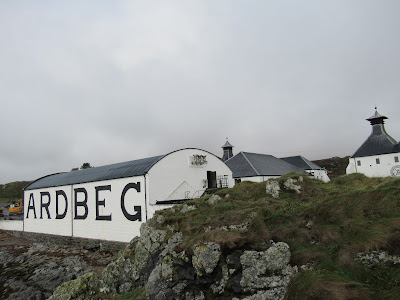